Rouhani Appreciates Leader’s Support during 8 Years of His Presidency 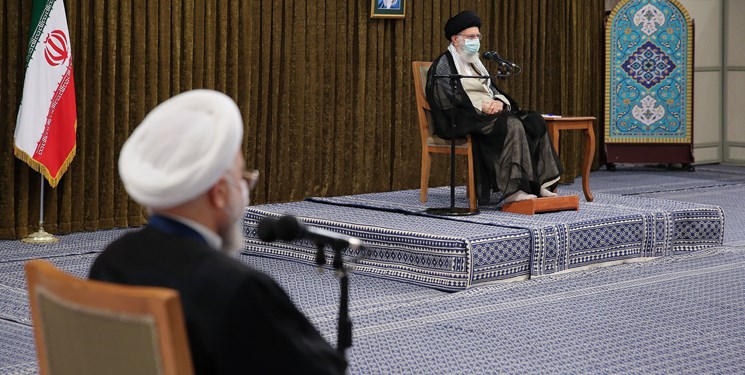 TEHRAN (FNA)- Iran’s outgoing President Hassan Rouhani thanked Supreme Leader of the Islamic Revolution Ayatollah Seyed Ali Khamenei for his support for the government during the past 8 years of his tenure.

Rouhani made the comments during his last meeting as Iran’s president with Ayatollah Khamenei on Wednesday.

The Leader received Rouhani and his cabinet ministers a few days before a new administration is formed in Iran by President-elect Ebrahim Rayeesi.

Rouhani, who spoke before the Leader delivered his speech, presented a report on his administration's record over the past 8 years to the Leader.

He considered economic growth and reduction in inflation rate in the first few years after he took office in 2013 as among one of the greatest achievements of his government, and said, "The enemy sought to cripple the economy and the country with an economic conspiracy in 2018, but it failed," in an apparent reference to US withdrawal from the nuclear deal and starting a Maximum Pressure Campaign against Tehran in May 2018 by the previous US president Donald Trump.

The president pointed to the formation of the High Coordination Council for Economic Affairs at the behest of the Leader as one of his support in 2018 after the US withdrawal from the JCPOA and re-imposing the sanctions to tackle the foreign economic pressures, and noted, amid the sanctions on the oil sales and banking transactions, the country could increase its revenues and meets the domestic needs by boosting the petrochemical, mining and oil and gas industries.

He further noted that by relying on internal resources, the country and his administration could meet the domestic needs for anti-coronavirus vaccines under the pressures of sanctions and the Covid-19 epidemic.

Ayatollah Khamenei said on Wednesday that experience of the nuclear deal with the western states in the past 8 years proved the West is not trustworthy, and advised the new government to take a lesson from the Rouhani administration's talks with West.

“A very important experience in this period (8-year-long presidency of Hassan Rouhani) that the future generations should use is distrust of the West,” Ayatollah Khamenei said, addressing the last meeting with Rouhani and his cabinet members in Tehran.

"By including this sentence, they want to provide an excuse for their future meddling with missile and regional issues through the nuclear deal, and if Iran refuses to discuss them, they will say that we have violated the agreement and there will, hence, be no agreement," Ayatollah Khamenei said.