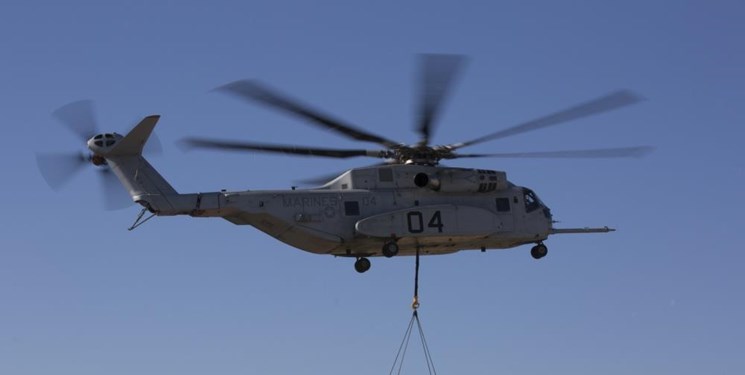 TEHRAN (FNA)- The US State Department approved the potential sale of 18 Sikorsky CH-53K King Stallion heavy-lift helicopters to the Israeli regime in a Foreign Military Sales deal worth about $3.4 billion amid reported demands from Tel Aviv for more American weaponry in case of a renewed US deal with Iran as pledged by the administration of President Joe Biden.

According to the report, the announcement of the sale come as the Israeli regime “is sending signals to Washington that any renewed deal with Iran should come with more arms for Israel, including items not normally sold to allies”.

Citing Israeli sources, it reported earlier in July that “should the US and Iran reach a new nuclear agreement, Israel will request new military compensation from Washington” — including technologies that have not been previously offered to the occupying regime.

It also noted that Tel Aviv is weighing a request for “advanced systems” that would enable a preemptive strike on Iran.

According to the July 13 report, while the “Israeli sources” would not say exactly what systems would be involved in the discussions, “the capability could be applied to the Israeli Navy’s new Dolphin AIP submarines”.  It then cited “regional sources” to claim that one of these submarines is always “in the vicinity of Iran”.

Notifying the US Congress of the helicopter deal, Pentagon’s Defense Security Cooperation Agency said in a July 30 statement, “The United States is committed to the security of Israel, and it is vital to US national interests to assist Israel to develop and maintain a strong and ready self-defense capability.”

“This proposed sale is consistent with those objectives,” it further claimed, adding, “The proposed sale will improve the Israeli air force’s capability to transport armored vehicles, personnel, and equipment to support distributed operations.”

Friday’s announcement of the deal reportedly represents the fifth US weapons sales to the Israeli regime made public since the start of fiscal 2017.

The Israeli regime reportedly intends to use the helicopter to replace its fleet of 22 ageing CH-53D ‘Yasur’ helicopters, in service since the 1960s.

Commenting on the deal, Israeli Military Chief Benny Gantz was cited by local media as insisting that the helicopter deal is “essential” for the regime’s notorious military forces “to carry out a wide range of operational activities”.

"The decision was made following a professional assessment that included test flights in all the proposed aircraft, as well as a thorough examination of the various alternatives in terms of engineering, technology, maintenance and other considerations," Gantz further claimed as quoted in press reports.

In February, the Israeli regime selected the CH-53K over the Boeing CH-47 Chinook. The King Stallion was initially developed and built for the US Marine Corps and is the most powerful helicopter in the American military.

The heavy lift CH-53K is powered by three GE Aviation T408-GE-400 turboshaft engines, which combined allow the helicopter to carry an external sling load up to 12,200 kilograms – for example, an armored Joint Light Tactical Vehicle, plus several thousand pounds of additional payload – over a distance of 204 kilometers. The Israeli regime has requested 60 T408-GE-400 engines: 54 installed in the helicopters, in addition to six spares.

Additionally, the Israeli military has already asked the US to speed deliveries of the Boeing KC-46-46 tanker. in efforts to have delivery of the first two aircraft moved to as early as the end of 2023 and the second at the beginning of 2024. It was originally planned for late 2025, Breaking Defense reported in mid-July, noting that Tel Aviv seeks a fleet of eight KC-46 tankers to replace its 707 fleet.

Pointing to the secret visit to Jordan of Israeli Prime Minister Naftali Bennet in early July for talks with King Abdullah II, the report cited sources as saying that “Iranian efforts to gain greater influence in the region was one of the main issues of the meeting” in Amman.