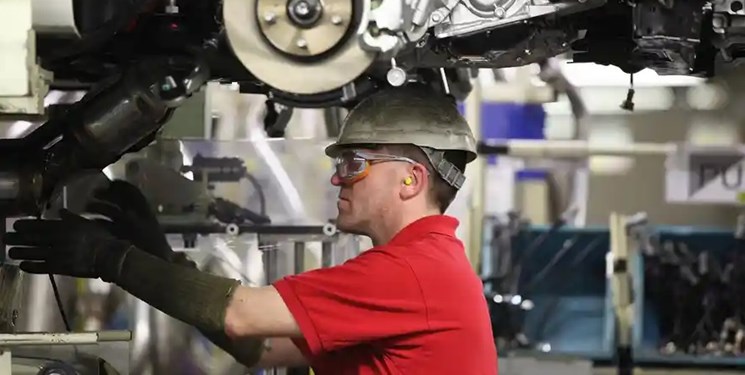 TEHRAN (FNA)- Shortages of labour and materials are hampering the ability of Britain’s manufacturers to take advantage of a post-lockdown boost to demand, the latest snapshot of industry showed.

Despite posting another strong performance in July, the monthly survey from IHS Markit/Cips found output and order book growth slowed to its weakest in four months, The Guardian reported.

The report found that expansion would have been faster last month had it not been for stretched supply chains and problems recruiting staff. Firms also reported continued difficulties adjusting to post-Brexit trading arrangements.

The July manufacturing purchasing managers’ index (PMI) stood at 60.4 – well above the 50.0 cut-off point between an expanding and contracting sector – but down on the 63.9 in June, and the record 65.6 reported in May.

IHS Markit/Cips said the July performance was still among the best on record but would have been even better had it not been for supply constraints. Cost and price pressures increased during the month, the survey added.

Rob Dobson, a director of IHS Markit, said, “Although July saw UK manufacturers report a further month of solid growth, scarcities of inputs, transport and labour are stifling many businesses."

“On the one hand, manufacturers are benefiting from reopening economies. This is leading to solid inflows of new work from both domestic and overseas markets, including the US, the EU, China and the Middle East," he said.

“On the other, the recent surge in global manufacturing growth has led to another month of near-record supply chain delays, exacerbated by factories and their customers building up safety stocks. Some firms also noted that post-Brexit issues were still a constraint on efforts to rebuild sales and manage supply and distribution channels to the EU,” he added.

Duncan Brock, the group director of the Chartered Institute of Procurement and Supply, said that recruiting skilled labour became more difficult in July “with workers changing jobs, isolating or hesitating to return”.

James Brougham, a senior economist at the manufacturers’ lobby group Make UK, said, “We can now see the limiting impacts of the growing supply chain and input price disruptions on UK manufacturers’ road to recovery. Despite the growth over the last year as the industry digs itself out of the pandemic, this is the second consecutive month where the rate of that recovery has slowed.”