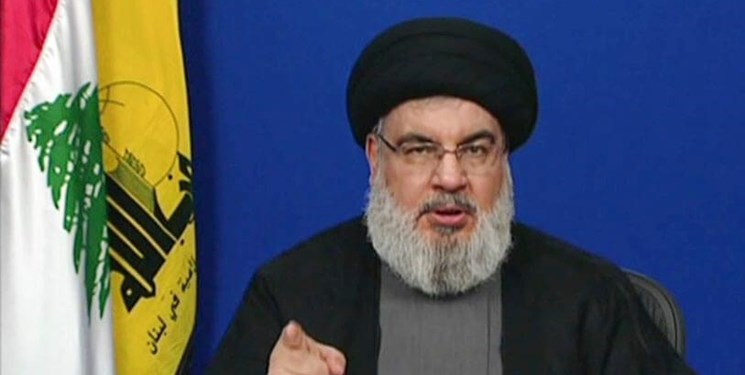 TEHRAN (FNA)- The Hezbollah chief said enemies are plotting to drag the Lebanese resistance movement into a civil war and tarnish its image, following the murder of a member by a number of extremists, saying the group will not be lured into such a trap.

At a meeting with Shia eulogists, Seyed Hassan Nasrallah shed light on the conspiracies that the enemies have been pursuing against Hezbollah, days after a member of the movement, Ali Shibli, was shot dead during a wedding in the town of Jiyeh, South of the Lebanese capital Beirut.

The shooter was identified as Ahmad Zaher Ghosn, brother of Hasan Ghosn, a teenage boy who was killed during the August 2020 clashes in the town of Khalde, where Shibli’s shopping center was attacked by supporters of extremist cleric Omar Ghosn from an Arab tribe.

The assailants wanted the removal of a banner which Shibli had put atop his shopping center to commemorate Ashura, the martyrdom anniversary of Imam Hossein (AS), the third Shia imam.

In a statement after Shibli’s murder, Ghosn family accused the Hezbollah member of being responsible for the killing of Hasan, saying Ahmad had “rebelled for his dignity and took justice into his own hands.”

Hezbollah, however, denied any involvement in Hasan’s killing and said, “We affirm our absolute rejection of all kinds of killing and the desecration of sanctities and dignity, and we call upon the security and judicial agencies to respond firmly to the perpetrators and those who participated with them accountable.”

At the meeting, Nasrallah said enemies are targeting Hezbollah on various fronts, including by trying to harm the resistance movement’s image and drag it into a civil war.

Touching on Shibli’s killing, Nasrallah said, “We have no blood to be trampled on; but we do not go anywhere that the enemy wants [us to go]. Bringing Hezbollah to the scene meant a decision to go to civil war. There are people who are trying to bring weapons to fight us.”

“Hezbollah will not be lured into the trap of civil war and we know what to do,” he added.

In an interview with Al-Manar TV channel, Hezbollah MP Hasan Fadlalalh said that the assaults on Saturday and Sunday were perpetrated by gangs, stressing that Arab clans do not carry out such terrorist acts.

Voicing Hezbollah’s keenness to preserve security and peace, Fadlallah urged the Lebanese army to arrest those behind the ambush and warned that a failure to do so leads to chaos and risks national security.

Meanwhile, Lebanon’s Amal movement warned of seditionist acts and called for a decisive action by the army and security forces to restore normalcy in Beirut.

Lebanese President Michel Aoun asked the army to take immediate measures to restore calm to the region and arrest the shooters.