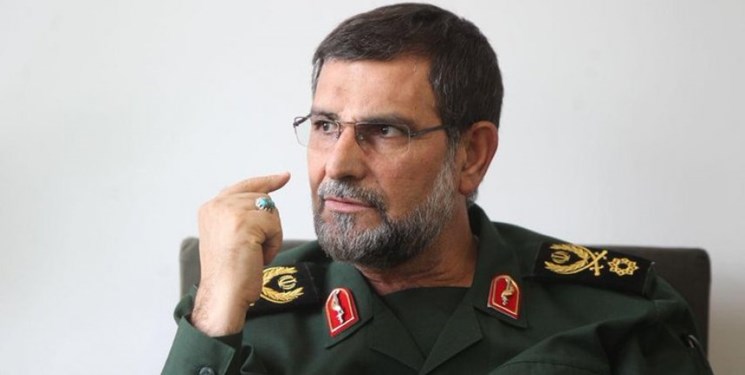 TEHRAN (FNA)- Commander of the Islamic Revolution Guards Corps Navy Rear Admiral Alireza Tangsiri underlined his forces' full control over the movements of vessels passing via the Strait of Hormuz.

"Today, in the strategic region of Strait of Hormuz a control system is dominant so as any vesssel that enters and exits the strait it is fully monitored with intelligence superiority and there is full smart dominance in place in the Strait of Hormuz," Admiral Tangsiri said.

He pointed out that the enemy principally knows that its movements are being monitored and as soon as a wrong move even accidentally is made, they will receive serious warning and they should abide otherwise they will face rigid and powerful reaction.

"Full security is prevalent along all water borders of Persian Gulf and the Strait of Hormuz due to vigilant and powerful presence of brave IRGC Navy forces," Admiral Tangsiri added.

He reiterated that the IRGC Navy forces are always ready for defending the security and interests of the Islamic Republic of Iran in high seas and remote waters.

In relevant remarks on Wednesday, Commander of the Islamic Revolution Guards Corps (IRGC) Major General Hossein Salami underlined that Iran's response to the threats waged by enemies against the country will be ‘devastating’ and will make them feel regret.

"We warn them (enemies) to learn from the past and know that our response to enemies’ threats will be more destructive and regrettable," General Salami said.

Speaking in a live TV program on the recent media hype of enemies against Iran on Wedesday, General Salami added, "Ever since the Islamic Republic of Iran was established successfully, enemies left no stone unturned and made their utmost efforts to take advantage of events that sometimes took place inside the country in the fields of water or electricity shortages and similar issues."

“We are in the process of transferring the government which differs from the power transfer that takes place in the United States, and this transition of government in Iran is dignified, healthy and peaceful, and we are going through the political process,” Salami he added.

In relevant remarks on Sunday, Deputy Commander of the Islamic Revolution Guards Corps (IRGC) Rear Admiral Ali Fadavi said Americans are well aware of their incapability to gain victory against Iran in any military war.

“The IRGC, the Basij (volunteer forces) and the Armed Forces enjoy such a high power and strength that the whole world knows that they cannot inflict the slightest harm on the security of the Islamic Republic of Iran,” Rear Admiral Fadavi said.

In relevant remarks on Tuesday, Iranian Armed Forces Spokesman Brigadier General Abolfazl Shekarchi blasted the recent contradictory reports of maritime incidents and hijacking in the Sea of Oman as Western “psychological warfare” meant to set the ground for new adventurism.

Brigadier General Shekarchi's remarks came after Reuters claimed that “Iran-backed forces” were believed to have seized an oil tanker off the coast of the United Arab Emirates (UAE).