Rayeesi: Pressures, Sanctions Not to Dissuade Iran from Pursuing Rights 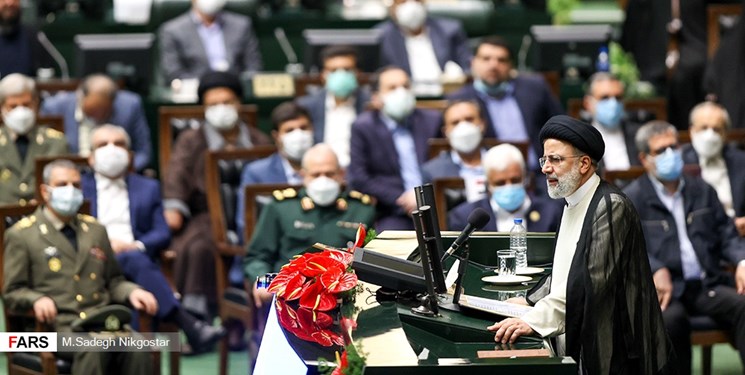 TEHRAN (FNA)- Iran's new President Seyed Ebrahim Rayeesi who took the oath of office before the parliament on Thursday said that his administration will pursue a balanced foreign policy, and underlined that sanctions and pressures will not stop him from pursuing the nation's rights.

"Sanctions against the Iranian nation should be lifted. We will support a diplomatic plan that achieves this goal. The Islamic Republic of Iran considers neighboring nations as its own family members," Rayeesi said, addressing his inauguration ceremony in Tehran.

"In a government of people, all components of the country's national power will be strengthened; and we use all the tools of national power, including diplomacy and intelligent interaction with the world, to secure the national interests of the Islamic Republic of Iran," he added.

"The power of the Islamic Republic of Iran in the region establishes security. Iran's regional capabilities support peace and stability in the countries and are used only to counter the threat of domineering and oppressive powers," Rayeesi said, adding that the regional crises should be resolved through genuine "intra-regional" dialogue based on meeting the rights of nations.

"I extend my hand of friendship and brotherhood to all the regional states, specially the neighbors," the new president said.

"The Islamic Republic's nuclear program is completely peaceful; the Islamic Republic of Iran has placed a religious ban on nuclear weapons, and these weapons have no place in the country's defense strategy," Rayeesi said.

"The policy of pressure and sanctions will not dissuade the Iranian nation from pursuing its legal rights, including the right to development," he stressed.

"The Islamic Republic of Iran considers neighboring countries and nations as its relatives and considers promotion of ties with them as the most important and main priority of its foreign policy and wants their dignity and promotion."

"Diplomacy should strengthen the ties of the regional nations and strengthen their commonalities in the fields of economy, culture, science and sports," Rayeesi said.

He noted that the world is changing and the pursuit of the interests of nations depends on an understanding of the new world and a "strategic interaction" with "emerging powers", adding that a successful foreign policy is a balanced foreign policy.

"Now, on August 5, the will of the nation was manifested again. The people are determined to follow the enlightened path of the Revolution. The message of the people's vote in the June 18 elections was a message of change and justice. We are true defenders of human rights, and we do not accept silence in the face of oppression, crime and the violation of the rights of innocent and defenseless human beings," Rayeesi said.

"We will stand beside the oppressed whether the oppression and crime is in the heart of Europe and the US, or in Africa, or in Yemen, Syria and Palestine," he added.

The president called on people, elites and the critics to help him by their proposals and criticism.

"We need people's presence on the scene and the sympathy and cooperation of the three branches of power, the institutions of the Islamic Revolution and the Armed forces. Given the current special circumstances, the government, the parliament and the judiciary should cooperate and interact with each other more than before, and they should not miss any opportunity to serve the people," he underlined.

Rayeesi stressed the need to meet people's demand to improve economy and living conditions and spread justice in the society.

"We will powerfully pursue creating maximum transparency in the economy, uprooting corruption and rent-seeking, strengthening the economy against shocks, curbing inflation, increasing the value of the national currency and restoring stability to the country's economy, supporting national production and striving for self-sufficiency in meeting basic needs, technological and knowledge-based progress, optimal management of the country's mines, water, gas and oil resources and attention to climate change and environmental protection," Rayeesi said.

The swearing-in ceremony of Rayeesi was held at the parliament in Tehran on Thursday in the presence of high-ranking Iranian officials and foreign guests from over 70 world states. 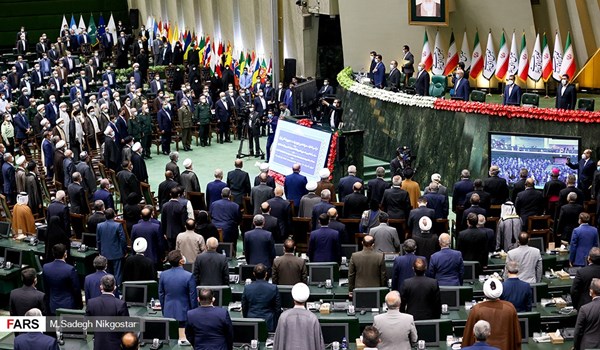 After speeches were delivered by heads of the Judiciary and Legislature, Rayeesi took to the podium to be sworn in as Iran’s eighth president following the Islamic Revolution of 1979.

Rayeesi was elected Iran’s eighth president after he garnered almost 62 percent of the votes in the June 18 election with a turnout of 48.8 percent. He succeeded President Hassan Rouhani, who has served two four-year terms in office.