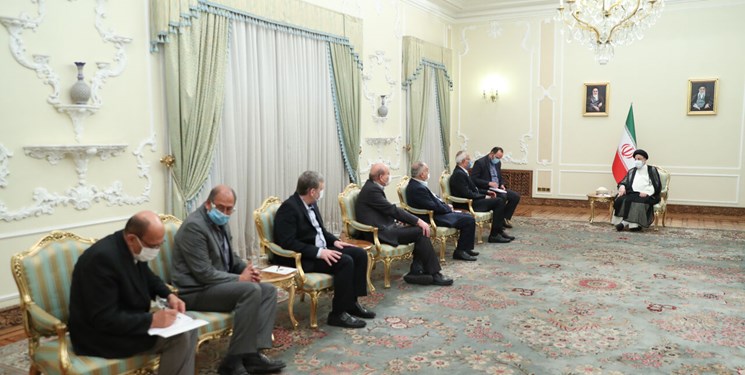 TEHRAN (FNA)- Iranian President Seyed Ebrahim Rayeesi underlined that the Islamic Republic will continue to support Palestine as the main issue of the Muslim world.

"We have never had and will never have any doubt about this policy. In our view, Palestine has been and will be the first issue of the Muslim world,” President Rayeesi said in a  meeting with Head of the Palestinian resistance movement Hamas Ismail Haniyeh.

Rayeesi lauded Haniyeh’s optimistic stance on the liberation of al-Quds and the end of Palestine’s occupation, and said “Operation al-Quds Sword” - the Palestinian resistance groups' 11-day retaliatory rocket and missile launches in response to Israel's brutal bombing campaign of Gaza in May - showed that a great leap has been made in the fight against the occupiers.

"Today, signs of great victory of the resistant movement have emerged and Operation al-Quds Sword was one of the signs of this victory,” he said.

Haniyeh, for his part, said many hostile positions of the Israeli regime, the United States, and some other countries against Iran are rooted in the Islamic Republic’s support for resistance movements and its refusal to accept the US plans for Palestine and emphasized that Hamas stands by Iran in the face of such hostile policies.

He added that Iran has always attached special significance to the issue of Palestine since the victory of the Islamic Revolution in 1979.

Haniyeh expressed his optimism about the future of Hamas and noted that Operation al-Quds Sword has changed the international community’s perception of resistance movements and the balance of power in the region.

"The Islamic Republic of Iran has no doubt in supporting Palestine, and we will always defend the rights of these oppressed people,” he said.

Nakhalah, for his part, said the Islamic Republic is a model of peaceful transition of power in the world while there was a power transfer conflict in the US just a few months ago.

In another meeting with Secretary General of the Popular Front for the Liberation of Palestine Talal Naji and his deputy Abu Ahmad Fuad, the Iranian president said Palestine and the liberation of Holy al-Quds are the most important issues of the Muslim world.

Naji, for his part, said resistance will continue until the final victory against the Israeli regime, adding that the resistance front would stand by the Iranian people because the Islamic Republic seeks to protect security of the entire region.

The Palestinians visited Tehran to attend President Rayeesi's inaugurtion ceremony which was held on Thursday.

The swearing-in ceremony of President Seyed Rayeesi was held at the parliament in Tehran on Thursday in the presence of high-ranking Iranian officials and foreign guests from over 70 world states.

Iranian people voiced their message for creating a change in the recent presidential election and now a modern chapter in the history of the Islamic Revolution has started, he said, adding that this chapter will try to compensate shortcomings and defects.

Qalibaf named the new chapter as “Efficiency and accountability”, and noted, "All officials and lawmakers of the country should first focus on efficiency so as to create a good life for the people. And next, we should be accountable for the shortcomings and try to solve them."

He said the Parliament is committed to helping the next administration bring economic stability and hope to the society.

Qalibaf said officials are aware of the shortcomings in the management of the country and understand the economic pressure on the people.

“We also know that sanctions and threats have made the management of the country hard but along all these challenges, there are significant God-given potentials. If these potentials are utilized, one can defeat the challenges," he said.

Judiciary Chief Gholam Hossein Mohseni Eje'i then addressed the meeting, and said the judiciary is ready to help the government to spread justice and protect the rights of people and legitimate freedoms and to fight corruption, and it will help with all its might and will be more serious than ever in the fight against corruption.

"I hope that with the help of God, the esteemed President, with the help of other forces, elites and the people, will succeed in this serious responsibility and take action as soon as possible to resolve people's problems," he added.

After speeches were delivered by heads of the Judiciary and Legislature, Rayeesi took to the podium to be sworn in as Iran’s eighth president following the Islamic Revolution of 1979 while standing beside the Judiciary chief.

"I, as the President, upon the Holy Qur'an and in the presence of the Iranian nation, do hereby swear in the name of Almighty God to safeguard the official Faith, the system of the Islamic Republic and the Constitution of the country; to use all my talents and abilities in the discharge of responsibilities undertaken by me; to devote myself to the service of the people, glory of the country, promotion of religion and morality, support of right and propagation of justice; to refrain from being autocratic; to protect the freedom and dignity of individuals and the rights of the nation recognized by the Constitution; to spare no efforts in safeguarding the frontiers and the political, economic and cultural freedoms of the country; to guard the power entrusted to me by the nation as a sacred trust like an honest and faithful trustee, by seeking help from God and following the example of the Prophet of Islam and the sacred Imams, peace be upon them, and to entrust it to the one elected by the nation after me."

Rayeesi then addressed the ceremony.

Over 100 foreign journalists and media workers as well as a large number of their Iranian counterparts coverred the ceremony.

According to Article 121 of the Constitution, the inauguration of the president must take place in the parliament, and he took the oath in a public meeting in the presence of representatives and members of the Guardian Council, along with the head of the judiciary.

After the inauguration ceremony, the president has two weeks, according to the regulations, to introduce the cabinet and the ministerial program to the Islamic Consultative Assembly, which will evaluate the ministers and their plans for a week after announcing their receipt in the assembly.

Due to the conditions regarding the coronavirus epidemic, the ceremony ended sooner than the ones held for previous presidents.

Speaking on the sidelines of Wednesday’s parliamentary session, lawmaker Mohsen Dehnavi said that because of the COVID-19 epidemic, there are restrictions in the number of the Iranian and foreign guests who have been invited to attend the swearing-in ceremony.

Rapporteur of the parliament’s Presiding Board Seyed Nezameddin Mousavi announced on Monday that Over 115 officials from 73 world states have declared preparedness to attend the inaugural of Rayeesi.

Rayeesi was elected Iran’s eighth president after he garnered almost 62 percent of the votes in the June 18 election with a turnout of 48.8 percent. He succeeds President Hassan Rouhani, who served two four-year terms in office.