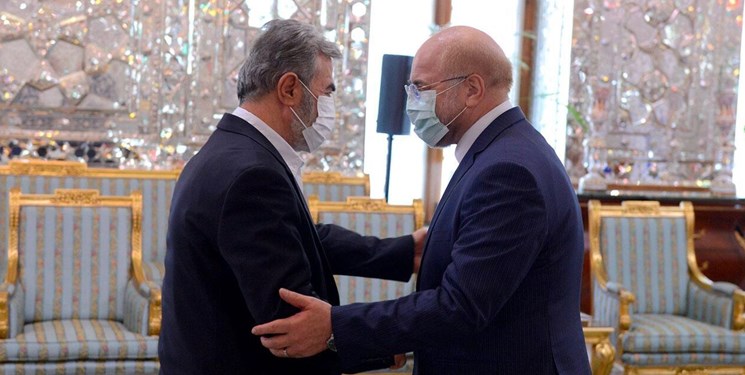 "Iran's support will continue until the liberation of the Holy Quds," Qalibaf said in a meeting in Tehran with visiting Secretary-General of Palestine’s Islamic Jihad Resistance Movement Ziyad al-Nakhalah.

He congratulating al-Nakhala on the recent victories of the Palestinian nation in the recent 12-day war against Israel, and said, "Israel did not expect such a defeat."

"The Iranian parliament supports any approaches that would lead to further unity among the Palestinian movements," Qalibaf added.

Al-Nakhlah, for his part, thanked Iran for its support for the Palestinian cause, and said, "The victories of the Palestinian people and fighters would not have been possible without the support of the Islamic Republic of Iran."

In relevant remarks on Monday, Commander of the Islamic Revolution Guards Corps (IRGC) Major General Hossein Salami in separate meetings with Leader of Palestine's Islamic Jihad Ziyad al-Nakhalah and Head of Hamas Politburo Chief Ismail Haniyeh stressed that the decline of the Zionist regime is a reality which can be materialized soon.

“Given the undeniable realities on the ground, we rest assured that the decline of the Zionist regime is more than a wish, a reality that can happen in the near future,” General Salami said in Tehran on Monday.

He referred to the recent war between the Zionist regime and the Palestinian Islamic Resistance and the Operation Saif al-Quds, and said, “In fact, a new and stronger Palestine emerged in the recent battle, and your victory was beyond the achievements of a military victory."

General Salami underlined that only power can force the rebellious Zionists to go quiet, and added, “Strengthening of Palestine is a strategy and a way that should never be stopped.”

He dismissed the idea that the Zionist regime is invincible, and that there is no other way for the Islamic and Arab countries to deal with Al-Quds occupiers, and said, “This idea (of invincibility) collapsed suddenly with the Operation Saif al-Quds, and this battle showed that it is Palestine that has become powerful, and the decline and collapse of the fake Zionist regime is definite.”

Nakhalah, for his part, said that the resistance fighters and field forces are highly prepared to enter any battle in defense of Al-Quds and to continue the fight against the Zionists with power.

Also, Haniyah, lauded Iran for its supports for the resistance forces, and said, “Today, the Zionist regime is more than ever in a nightmare after the defeat in the battle of Saif al-Quds, and the Palestinian Islamic Resistance, at the height of its power and integrity, is using the past experiences to continue its successes and victories in the future.”

Tel Aviv launched a brutal bombing campaign against the besieged Gaza Strip on May 10, following Palestinian retaliation against violent raids on worshipers at Al-Aqsa Mosque and the regime’s plans to force a number of Palestinian families out of their homes at the Sheikh Jarrah neighborhood of East Jerusalem Al-Quds.

According to Gaza’s Health Ministry, 260 Palestinians were killed in the Israeli offensive, including 66 children and 40 women. At least 1,948 others were also wounded.

In response, Palestinian resistance movements, chief among them Hamas, launched Operation Al-Quds Sword and fired more than 4,000 rockets and missiles into the occupied territories, killing 12 Israelis.

Apparently caught off guard by the unprecedented barrage of rockets from Gaza, Israel announced a unilateral ceasefire on May 21, which Palestinian resistance movements accepted with Egyptian mediation.