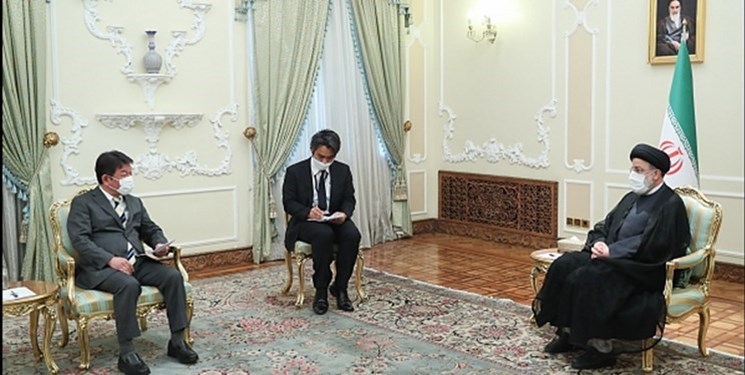 Rayeesi made the remarks in a meeting with Japanese Foreign Minister Toshimitsu Motegi in Tehran on Sunday. He appreciated Japan's humanitarian assistance to Iran in the fight against Coronavirus, and expressed the hope that continued cooperation between the two countries in this field would help eradicate the global coronavirus disease in both countries and the world.

Rayeesi stressed the need to free Iran's financial resources in Japan, and noted that any delay in the release of Iranian assets in Japanese banks is not justifiable to Iran.

He also pointed out that it was the US that withdrew from the Iran nuclear deal (JCPOA) and expanded the anti-Iran sanctions, blasting the Europeans for remaining indifferent to the US sanctions in violation of the deal and for not abiding by their undertakings under the deal.

Rayeesi stressed that any country that does not abide by its JCPOA commitments should be held accountable.

He emphasized that Iran basically sees no problem with negotiations, adding that no one can buy any justifications for continued US sanctions against the Iranian nation.

Elsewhere, Rayeesi touched upon the developments in Afghanistan, and said that Iran welcomes any efforts by the Japanese government and regional countries to achieve peace and stability in Afghanistan.

"The Islamic Republic of Iran has always supported and continues to support peace and stability in Afghanistan, while we believe that it is up to Afghans themselves to make decisions on Afghanistan," he said.

"Foreign intervention has led to the continuation of Afghanistan's problems," Rayeesi said, adding, "The presence of Americans in the regional states, including Afghanistan, has not created security but it has been a threat to their security."

The president further condemned the US bullying that threatens the independence, freedom, and identity of nations, stressing, "It is necessary that nations confront the unilateralism and monopolizing of power by bullying powers."

Motegi, for his part, congratulated Raeyeesi on his victory in Iran’s presidential election, and stressed developing and deepening of the age-old relations between the two countries.

He further reiterated his country's support for the JCPOA as an international agreement that benefits all, saying that Japan has always worked in line with the security of the region.

Motegi went on to express concern over recent developments in Afghanistan, stressing the need to stop violence and save lives.

He added Tokyo supports the diplomatic efforts of the regional countries to achieve peace and stability in the region, adding that the Japanese principled position is that problems and issues should be resolved peacefully and through dialogue.

Earlier today, Iran’s Foreign Minister Mohammad Javad Zarif said he has exchanged views with his Japanese counterpart on a range of issues, including “the catastrophic US-engineered situation in Afghanistan”.

Zarif made the remarks in a tweet after a meeting with Motegi in Tehran on Sunday, which came one week after the Taliban’s takeover of Afghanistan following the US abrupt military withdrawal that put an end to a futile two-decade war.

The ill-prepared US pullout plunged Afghanistan into chaos, with thousands of people still at Kabul’s international airport racing to flee the South Asian country.

Zarif said in addition to the Afghan situation, the two sides discussed the 2015 Iran nuclear deal, officially titled the Joint Comprehensive Plan of Action (JCPOA), as well as ties between Tehran and Tokyo.

“Pleased to host Japanese FM Motegi in Tehran on Sunday,” he wrote. “In what is probably my last meeting with a counterpart as Iran’s foreign minister, we discussed strengthening bilateral relations, how to resuscitate the JCPOA and the catastrophic US-engineered situation in Afghanistan.”