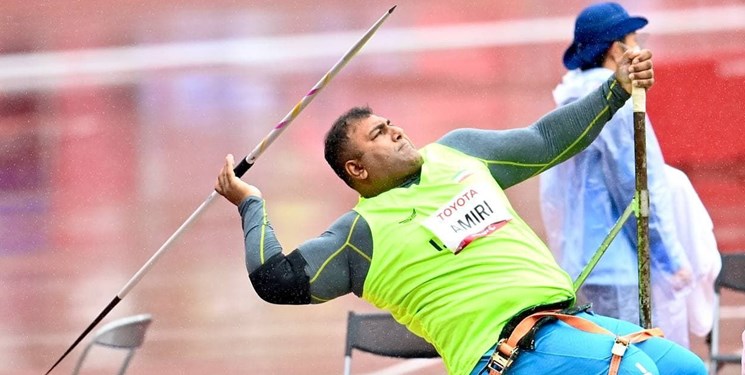 Amiri who participated in the Tokyo Paralympics in the F54 competition threw the javelin for 31.27 meters in his first throw and broke the Paralympics record.

In his fourth throw, he broke the world and Paralympics again with 31.35 meters.

Athletes from Russia and the US came second and third, respectively.

Amiri's gold medal was Iran’s 10th in the games.

In a relevant development on Tuesday, another Iranian Javelin thrower Saeed Afrooz bagged gold medal for the Iranian delegation at the 2020 Tokyo Paralympic Games in Japan.

Afrooz won the gold medal in the men’s javelin F-34 with a throw of 40.05 meters, breaking the world and Paralympics record.

His gold was Iran’s eighth gold medal in the Games.

The silver and bronze medals were achieved by Colombian rivals Mauricio Valencia and Diego Fernando Meneses Mendina with 37.84 and 37.11 meters, respectively.

Also on Tuesday, Hashemiyeh Motaghian seized the first-ever gold medal of Iran in the women’s section of the athletics of the Paralympics Games.

With a throw of 24.5m in javelin –F55 category, she gained the gold medal after improving the world record by 47 centimeters.

Tokyo Paralympics began on August 24 and will continue until September 5.