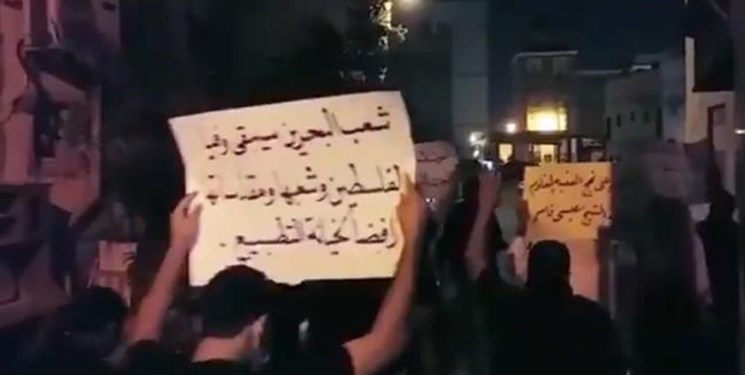 TEHRAN (FNA)- Bahrainis staged a demonstration in condemnation of normalization of diplomatic ties between the tiny Persian Gulf kingdom and Israel, inauguration of the Al Khalifah regime’s first ambassador to the occupied territories, and exchange of envoys between Manama and Tel Aviv regimes.

People took to the streets on Friday evening to condemn Bahraini authorities’ warming ties with Israel, chanting slogans such as “Normalization of Relations is Treason” and “We Oppose Normalization”, presstv reported.

The protesters voiced solidarity with jailed political activists, and demanded their immediate release.

Na’eh was Israel’s first diplomat to take up office in the United Arab Emirates following the latter's US-brokered normalization deal with Israel last year, serving as chargé d’affairs of the Israeli embassy in Abu Dhabi.

In July, Lapid announced his intention to nominate Amir Hayek as Israel’s permanent ambassador to the UAE.

Israel’s Foreign Ministry signed off on Al-Jalahmah’s appointment in March.

The Palestinian resistance movement Hamas said Bahrain has actually demonstrated its complicity in crimes committed by the Israeli regime against the Palestinians by appointing its first ambassador to Israel.

"The appointment of an ambassador of the Bahraini regime to the Zionist entity reflects its insistence on the national sin that it committed when it signed the normalization agreement with the occupation," Hamas Spokesman Hazem Qassem said.

Qassem noted that the move represents Bahrain’s “clear support” for Israel’s policies against the Palestinians and its “full complicity” in the crimes committed by Tel Aviv.

Palestinians, who seek an independent state in the occupied West Bank and Gaza Strip with East Al-Quds as its capital, view the deals as a betrayal of their cause.

Demonstrations in Bahrain have been held on a regular basis ever since a popular uprising began in mid-February 2011.

On March 14, 2011, troops from Saudi Arabia and the United Arab Emirates were deployed to assist Bahrain in its crackdown.

On March 5, 2017, Bahrain’s parliament approved the trial of civilians at military tribunals in a measure blasted by human rights campaigners as being tantamount to imposition of an undeclared martial law countrywide.