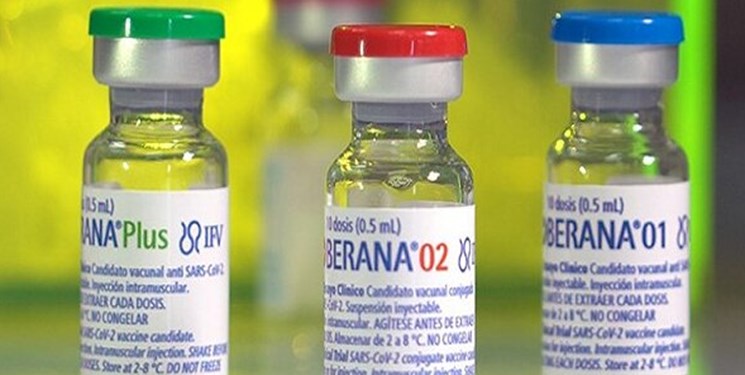 The joint vaccine of Iran and Cuba can be considered as one of the most successful vaccines in the world.

The director of the clinical trial project of the third phase of the Cuban-Iranian joint vaccine had previously pointed out that the study on the effectiveness of the Soberana 02 vaccine had been completed in the six cities.

In relevant remarks in late May, the head of Iran's Pasteur Institute, Alireza Biglari said that the Iran-Cuba jointly produced COVID vaccine is in its clinical study's final phase.

He went on to say that the vaccine has successfully completed phases one and two of clinical studies in Cuba, and the third phase is being conducted simultaneously in Iran and Cuba.

The Iranian health ministry announced on Monday that 27,579 new cases of coronavirus infection have been reported across the country during the past 24 hours, adding that 583 patients have passed away in the same period of time.

"A sum of 27,579 new patients infected with COVID-19 have been identified in the country based on confirmed diagnosis criteria during the past 24 hours," the Iranian Health Ministry's Public Relations Center said on Monday, and added, "3,973 patients have been hospitalized during the same time span."

"Unfortunately, 583 patients have lost their lives in the past 24 hours, increasing the number of the dead to 111,257," the ministry noted.

It expressed satisfaction that 4,394,083 coronavirus patients have recovered or been discharged from hospitals so far.

The center went on to say that 7,628 cases infected with COVID-19 are in critical conditions.

It added that 29,568,864 coronavirus diagnosis tests have so far been carried out across the country.

The health ministry public relations warned that 246 cities are rated red, 144 cities are orange, and 58 cities are yellow.

Iran has seen a major surge in the number of coronavirus deaths and infections in recent days as the Delta variant of the virus continues to spread across the country.

Iranian President Seyed Ebrahim Rayeesi said earlier this month that the country will import 30mln doses of COVID-19 vaccine, stressing the necessity for providing millions more jabs to give immunity to the society.

Iran will import 30mln doses of vaccine, Rayeesi said, addressing a meeting of the national coronavirus campaign headquarters in Tehran.

“Experts believe that 60mln more doses of vaccine should be provided to control the improper situation of coronavirus outbreak in the country,” he added.

Rayeesi underlined for more serious measures to respect the health and hygiene protocols and control the border traffic to prevent further spread of coronavirus.

He set an ultimatum for the government to drastically change its methods of fighting the coronavirus epidemic as the country’s health system struggles under a fifth wave of infections.

Rayeesi told members of the national coronavirus campaign headquarters that Iran has to come up with an extensive plan for mobilizing volunteer forces to fight the rapid spread of the disease.

“The universal plan for overhaul in methods of fighting the coronavirus will be compiled in a special committee using the experiences of the past one and half years of the country,” said the president.

He said the plan would include clear action guidelines on hygiene protocols, vaccine production and delivery as well as on government support for health staff and businesses affected by the virus.

On vaccinations, Rayeesi vowed that his administration will continue to support domestic vaccine production although he said that no efforts will be spared to receive abundant supplies from abroad.

The coronavirus COVID-19 is affecting approximately all countries and territories around the world. The virus was first reported in the central Chinese city of Wuhan late 2019. It has so far killed over 4.5 million people and infected over 219 million others globally.

In relevant remarks earlier this month, Iranian First Vice-President Mohammad Mokhber rapped Washington and its allies for imposing banking sanctions which prevent Iran’s efforts to buy drugs and medical equipment amid surge in the number of coronavirus infected and deaths in the country.

“Although the arrogant system (led by the US) claims that access to medicine is free for all people and there is no restriction for any country, when we want to purchase the needed medicine, they do not allow transfer of money and prevent the drugs’ imports,” Mokhber said, addressing a meeting in Tehran.

He also noted that coronavirus has affected many businesses and the shortage of medicine and treatment-related issues have also placed a heavy burden on the country's budget, saying that these problems need serious planning and efforts to address the problems of businesses which are affected by the COVID-19 epidemic.