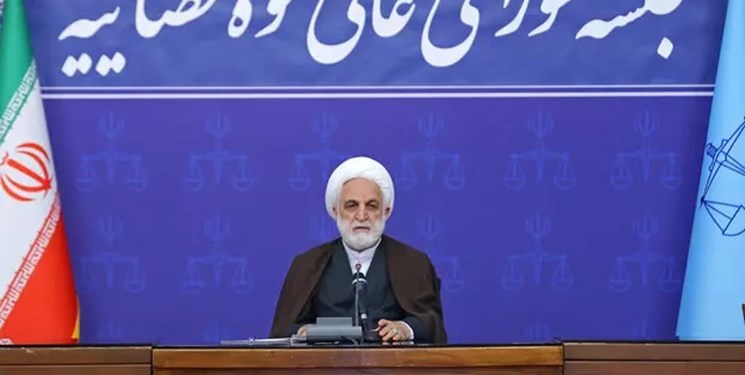 The Iranian judiciary chief, meantime, referred to  the anti-Iran Mojahedin-e Khalq Organization (MKO also known as MEK, NCRI or PMOI) terrorist group which is operating against Iran in some western countries with the backing of those governments.

In a relevant development last month, Iran’s High Council of Human Rights in a statement on Monday rapped the US and other western states for instrumental use of terrorist groups to attain their colonial goals.

“The systematic support of the US regime and the western governments for terrorists and their affiliate streams across the world is a manifestation of their false claims about fighting terrorism and displays the instrumental use of this capacity to advance their colonial goals,” the Council said in a statement on the occasion of the anniversary of the martyrdom of Iran’s late president Mohammad Ali Rajayee and former prime minister Mohammad Javad Bahonar by the MKO terrorist group.

It added that silence and passivity towards terrorism anywhere in the world and the classifying terrorism into good and bad is the main capacity for the spread of terrorism in all parts of the world, and no government or nation will be safe from its consequences.

The statement lashed out at certain governments and international bodies for their silence on the cruelest crimes against the Iranian nation in the past 4 decades and sheltering the anti-Iran terrorists, and said, “They are the main culprits behind the spread of terrorism in the world.”

The MKO is listed as a terrorist organization by much of the international community. Its members fled Iran in 1986 for Iraq, where they received support from then-dictator Saddam Hussein.

In 2012, the US State Department removed the MKO from its list of designated terrorist organizations under intense lobbying by groups associated with the Saudi regime and other regimes adversarial to Iran.

Earlier in June 2019, leaked audio of a phone conversation between two members of MKO, revealed Saudi regime has colluded with the MKO elements to frame Iran for the tanker attacks in the Persian Gulf.

“In the past week, we did our best to blame the [Iranian] regime for the (oil tanker) blasts. Saudis have called Sister Maryam (Rajavi)’s office to follow up on the results, [to get] a conclusion of what has been done, and the possible consequences,” Fakhteh is heard saying.

Attacks on two commercial oil tankers in the Gulf of Oman on June 13, 2019, and an earlier attack on four oil tankers off the UAE’s Fujairah port on May 12, 2019, have escalated tensions in West Asia and raised the prospect of a military confrontation between Iran and the United States.

The US, Saudi Arabia, and the UAE have rushed to blame Iran for the incidents, with the US military releasing a grainy video it claimed shows Iranian forces in a patrol boat removing an unexploded mine from the side of a Japanese-owned tanker that caught fire earlier this month.

The MKO which is said to be a cult that turns humans into obedient robots turned against Iran after the 1979 Islamic Revolution and has carried out several terrorist attacks killing senior officials in Iran; yet the West which says cultism is wrong and claims to be against terrorism, supports this terrorist group officially.