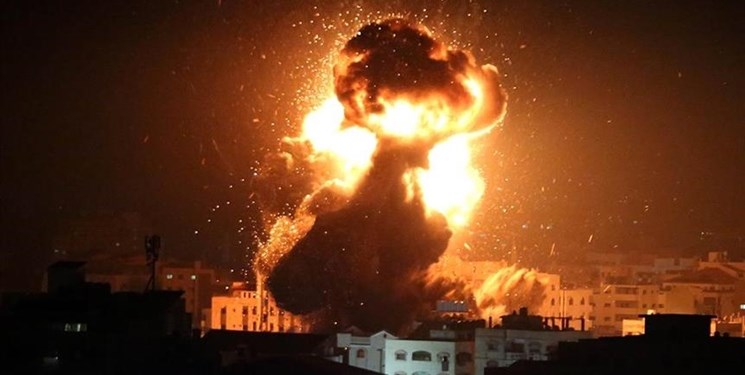 TEHRAN (FNA)- The Palestinian Hamas resistance movement denounced the latest Israeli airstrikes against the Gaza Strip, describing the raids as a desperate attempt by the regime to cover up its abject failure in the case of the recent Palestinian jailbreak.

Hamas Spokesman Hazem Qassem said the Israeli military carried out the airstrikes on the Southern parts of Gaza on Monday night right after six Palestinians broke out of the high-security Gilboa prison, presstv reported.

The raids, he added, were part of the regime’s attempts to hide its inability and defeat in the face of the Palestinian anti-occupation struggles.

The Israeli military claimed in a statement that it hit a Hamas rocket production facility and training camp in the city of Khan Yunis after incendiary balloons from the Besieged Palestinian enclave sparked three fires in occupied areas bordering the Strip.

Footage uploaded to social media showed the strikes lighting up the skies. There were no immediate reports of casualties.

In the predawn hours of Monday morning, the six Palestinian prisoners tunneled their way out through their cell’s drainage system and escaped from Gilboa prison.

Israeli prison officials were alerted by farmers who noticed them running through fields.

The six Palestinians include Zakaria Zubeidi, a former commander of the Palestinian resistance group Al-Aqsa Martyrs’ Brigade in the occupied West Bank city of Jenin, as well as five members of Islamic Jihad group.

Four of the Islamic Jihad members were serving life sentences, while the fifth had been held without charge for two years under a so-called administrative detention order, according to Israeli media.

Zubeidi was arrested by Israeli forces in 2019 on charges of involvement in a number of shooting attacks and is currently standing trial.

Hamas has called the escape “a heroic act and a victory for the will and determination of our heroic detainees”.

Islamic Jihad has also lauded the jailbreak as “a powerful blow to the occupation forces”.

“The option for the resistance front is to stand up against the [Israeli] enemy and to firmly tread that path, something which the six Palestinians demonstrated well” by escaping the Israeli jail, he said.

“We ask our Palestinian nation to welcome these heroes with open arms and help them. We call on our compatriots in Jenin to help them and not to overlook their rights,” the Islamic Jihad leader said.

Batash said, “The option for the resistance bloc is to fight the occupying [Israeli] regime and to continue armed struggle. The enemy is in a state of confusion due to the heavy blow its security and military institutions have suffered [in the wake of Gilboa prison break].”

“Today, our Palestinian heroes must put their trust in our nation.... We tell our inmates that their freedom is a responsibility that rests on our shoulders and the retreat of the enemy is in the best interests of the Palestinian cause,” the Islamic Jihad official added.

Human rights organizations say Israel violates all the rights and freedoms granted to prisoners by the Fourth Geneva Convention.

There are reportedly more than 7,000 Palestinians held at Israeli jails. Hundreds of the inmates have been apparently incarcerated under the practice of administrative detention.