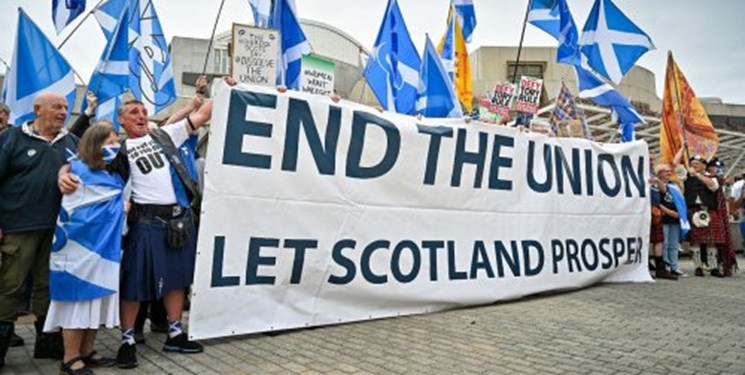 TEHRAN (FNA)- Democracy “will prevail” to allow another vote on Scottish independence, First Minister Nicola Sturgeon will insist, as she urges Prime Minister Boris Johnson’s government to work “in the spirit of cooperation” on the country’s future.

The SNP leader, who has previously said a mandate for a second vote was “beyond question”, will use her conference speech to stress that “it is not up to the Westminster government” to decide on Scotland’s future, The Independent reported.

Last week, the SNP leader stated the Scottish government would “restart” work on a plan for independence after it was put on hold by the COVID pandemic, adding she intended to deliver one before the end of 2023.

However, Johnson remains firmly opposed to a second vote and Alister Jack, the Scotland secretary, suggested last month that a referendum would be considered if opinion polls “consistently” showed 60 percent of Scots wanted a new vote.

“My approach to government and to politics will be, as far as possible, cooperation not confrontation,” Sturgeon will say on Monday to mark the close of the SNP conference.

“The experience of the pandemic and the challenges we face as a result reinforces my view that this is the right approach," she will add.

“So it is that spirit of cooperation that I hope the Scottish and UK governments can reach agreement — as we did in 2014 — to allow the democratic wishes of the people of Scotland to be heard and respected,” she will say.

She will add, “But, this much is clear. Democracy must — and will — prevail. Until recently no-one seriously challenged the right of the people of Scotland to choose whether or not they wished to become independent."

“As an independent country, co-operation between Scotland and our friends across the rest of the UK will continue, but it will be on a better basis: Scotland will be an equal partner," she will note.

In an interview with Sky News on Sunday, the Scottish first minister also insisted she was “confident” the country would vote Yes in a second vote — but would only hold a referendum “when the time is right”.

She stated, “Ultimately, of course, as with many things in the life of government, it will be a matter of judgement and it’s important that I get that judgement right because I’m very, very serious and have been for 18 months, when I say the biggest responsibility, the most serious responsibility on my shoulders, is steering the country through the biggest health crisis in a century.”

The SNP conference also backed the Scottish government plans for the timing of another independence referendum at the “earliest” possible moment after the COVID crisis.

Party members endorsed that timescale, backing a motion by 535 votes to 10 which sets out plans for another vote “as soon as it is safe to hold a proper, detailed, serious national debate on independence”.

Earlier, however, Sturgeon faced criticism from her predecessor and former First Minister Alex Salmond, who told Times Radio the lack of a second independence referendum had left the country in a “time loop”.

Salmond, who is now leader of the Alba Party, said, “Listeners and viewers will remember that Bill Murray film, Groundhog Day. The poor man was caught up in a time loop and it took him weeks to get out of it."

“Unfortunately Nicola has placed Scotland in a referendum time loop and it's taken six years and we're making no progress whatsoever. Now the Bill Murray film was a comedy. This is tragedy. This is Groundhog Scotland, Groundhog referendum,” he added.

Salmond, whose new party failed to win a single seat at the Holyrood elections in May, also criticised the new SNP/Green Party coalition’s record on education, health, the economy, local government – and the pandemic – as “at its very kindest mediocre”.

“When the immediate cloud of the pandemic lifts they shall be judged on that and probably harshly. We must not have independence judged with it,” Salmond told members gathered at the Alba Party’s conference.

Salmond, who appeared to contradict his own insistence that Alba members make their case “by talking up Alba not running down the SNP”, also announced plans to publish an alternative prospectus for Scottish independence.

He cited the Wee Blue Book, written by Wings Over Scotland campaigner Stuart Campbell, as having “stood out as winning converts to the national cause” when support for independence rose by 15 percent ahead of the first referendum.

The “wee Alba book” will be sent to 100,000 homes ahead of the council elections next year, Salmond said, adding that the party would have to fundraise to afford their publication.

It came after Sturgeon announced this week that the civil service would restart work on a prospectus for Scottish independence.