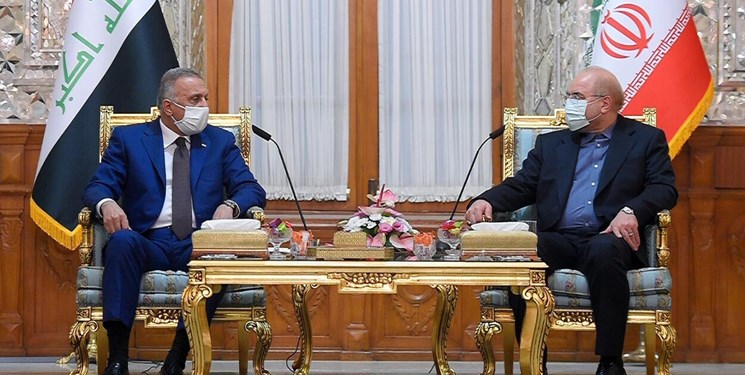 TEHRAN (FNA)- Iranian Parliament Speaker Mohammad Baqer Qalibaf called for the expulsion of all trans-regional forces from the region.

"The transregional powers have always tried to create differences among regional countries," Qalibaf said in a meeting with Iraqi Prime Minister Mustafa al-Kadhimi in Tehran on Sunday night.

He reiterated that all foreign troops should leave the region as soon as possible.

"It has been proven to us that transregional countries never make decisions in the interests of Iran and Iraq, and that the two states should resolve their cases by depending on their own capabilities," Qalibaf said.

The Iranian parliament speaker, meantime, said that the widening of cooperation between Tehran and Baghdad has an impact on regional issues.

The Iraqi prime minister, for his part, emphasized the importance of Iran-Iraq relations for the region, and called for the expansion of bilateral relations.

"Continuous interactions and dialogue between the Iraqi and Iranian officials will immensely influence removing the possible barriers and strengthening cooperation," al-Kadhimi said.

In relevant remarks earlier on Sunday, Iran' s First Vice-President Mohammad Mokhber in a meeting with al-Kadhimi said that cooperation between Tehran and Baghdad will help to restoration of stability in the region.

Mokhber pointed to the capacities and capabilities of the two countries, specially in the economic field, and said that Tehran and Baghdad can further broaden their cooperation by relying on these capacities.

Referring to huge capacities and potentials of Iran’s public and private sectors, specially in the engineering sector, he voiced Iran's readiness to participate in Iraq’s reconstruction.

The Iraqi prime minister,  for his part, underscored the importance of Khorramshar-Basra railway which can connect China's railway to Mediterranean Sea, and said creating infrastructures such as roads can strengthen strategic cooperation between the two countries and make the dream of Mashad-Karbala-Najaf highway come true.