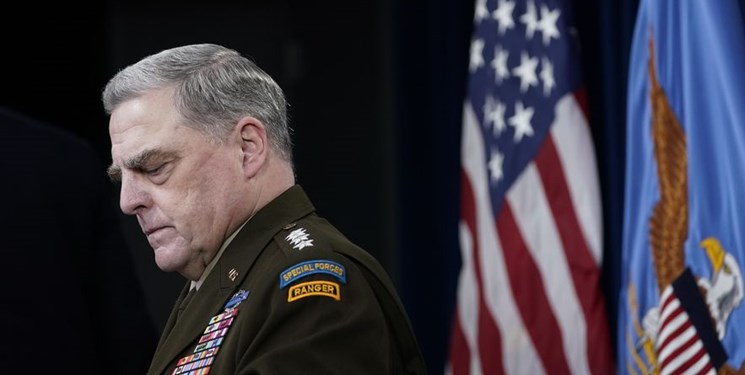 TEHRAN (FNA)- Top Republicans began calling for the scalp of the nation’s top military officer Tuesday over reports that he circumvented then-President Donald Trump by reassuring China about the US president and his ability to undermine him.

Trump issued a statement Tuesday evening saying that Gen. Mark A. Milley, chairman of the Joint Chiefs of Staff, may have committed treason if, as reported, he told his Chinese counterpart that the US wasn’t planning a surprise attack and, if it were, the general himself would sabotage the assault, Washington Times reported.

“If the story of “Dumbass” General Mark Milley … is true, then I assume he would be tried for TREASON in that he would have been dealing with his Chinese counterpart behind the President’s back and telling China that he would be giving them notification ‘of an attack.’ Can’t do that!” Trump said.

The top Republican on the Senate intelligence committee didn’t go so far as the T-word.

But Sen. Marco Rubio, Florida Republican, did say that if the accounts in “Peril”, a new book from Bob Woodward and Robert Costa of The Washington Post, are true, Gen. Milley should resign.

“Such subversion undermines the president’s ability to negotiate and leverage one of this nation’s instruments of national power in his interactions with foreign nations,” Rubio wrote Tuesday in a letter to President Joe Biden.

“A senior military officer interfering with that civilian-controlled process is simply unacceptable at best, and at worst, would cause ambiguity which could lead to war,” said Rubio, who also sits on the Foreign Relations Committee.