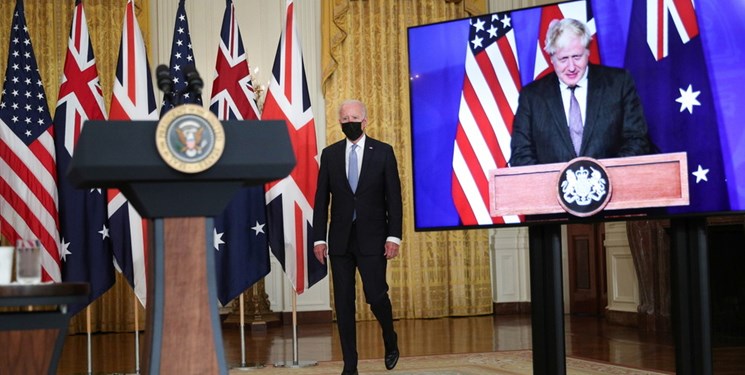 TEHRAN (FNA)- Britain’s Defense Minister Ben Wallace said he understands the disappointment of the French government and Naval Group at the loss of a major contract with Australia, but insisted it was not a ‘betrayal’ of Paris by the AUKUS partners.

Speaking on Thursday, Wallace stated that the UK had no strategic differences with France after Paris and French shipbuilder Naval Group were cut out of a deal to deliver submarines to Australia.

The AUKUS (Australia, UK, US) pact, announced by the countries’ leaders on Wednesday night, will see Australia procure conventionally armed, nuclear-powered submarines from their UK and US allies.

The agreement comes at the expense of Naval Group, whose 2016 deal with Australia will now be thrown out. It will be the first time the UK and US, both of which have operated nuclear submarines for decades, have shared nuclear technology for military purposes with Canberra.

“I understand France’s disappointment on its industrial contract,” but this is not a “betrayal,” Wallace told the BBC, confirming that he had already spoken with his French counterparts.

Naval Group’s deal to build diesel-power vessels for Australia was reportedly worth $40 billion.

Wallace added the deal would be worth a considerable amount to the British economy, echoing Prime Minister Boris Johnson’s talk of “levelling up” during his Wednesday night press conference with US President Joe Biden and Australian Prime Minister Scott Morrison.

“There will be a boost for the British defence industry in this collaboration because we have sub-systems that Australia doesn’t have that we will be able to offer into that,” Wallace noted.

On Thursday, French Armed Forces Minister Florence Parly stated the government will look to limit the financial damage to Naval Group following the contract’s cancellation and refused to rule out seeking compensation from Australia.

The Naval Group contract had been personally backed by French President Emmanuel Macron, although it is understood that complications had arisen in the past few years.

Wallace told Sky News on Thursday that the pact was looking to safeguard against a number of threats, dismissing the notion that it was aimed solely at China. He explained that nuclear submarines were harder to detect and don’t need to resurface.

The British PM has hailed a pact between the UK, Australia and the US, which will see Canberra take delivery of nuclear-powered subs, stating the deal will help safeguard peace and security in the Indo-Pacific for years to come, according to RT.

Speaking to parliament on Thursday, Johnson told the house that the UK and Australia are as closely aligned as any two countries in the world.

“The UK and Australia defend the same interests, promote the same values, and face the same threats,” Johnson stated.

Addressing the AUKUS (Australia, UK & US) pact, announced on Wednesday night by the leaders of the three nations, Johnson hailed the move to arm Australia with nuclear-powered, conventionally armed submarines.

"Australia’s future possession of this capability will help to safeguard the peace and security of the Indo-Pacific," he continued.

"Nuclear submarines are the capital ships of our age, propelled by an effectively inexhaustible source of energy,” Johnson stated, adding that their capabilities would allow Australia to silently patrol vast expanses of the ocean while “gathering intelligence, deterring adversaries and guarding the trade routes".

The prime minister contended that bringing another nation into the small cadre of militaries which operate nuclear-power submarines was “a decision of the utmost gravity, requiring perhaps the closest relationship of trust that can exist between sovereign states".

Johnson contended that he had “no hesitation about trusting Australia, a fellow maritime democracy” in granting Canberra the use of this technology, which has been used in the UK and the US for decades.

The submarine deal, announced as part of the AUKUS pact on Wednesday night, came at the expense of Paris and French shipmaker Naval Group, who had previously signed a deal with Canberra in 2016 for the delivery of 12 cutting-edge diesel-electric submarines to replace its more than two-decades-old Collins submarines.

The French Foreign Minister Jean-Yves Le Drian has registered his “anger and bitterness” over the AUKUS deal.

“This brutal, unilateral and unpredictable decision reminds me a lot of what Mr [Donald] Trump used to do,” Le Drian told franceinfo radio.

Focusing on Australia, which had confirmed its commitment to the 2016 deal with Paris just two weeks ago, he stated, “it’s a stab in the back. We created a relationship of trust with Australia and that trust has been broken".