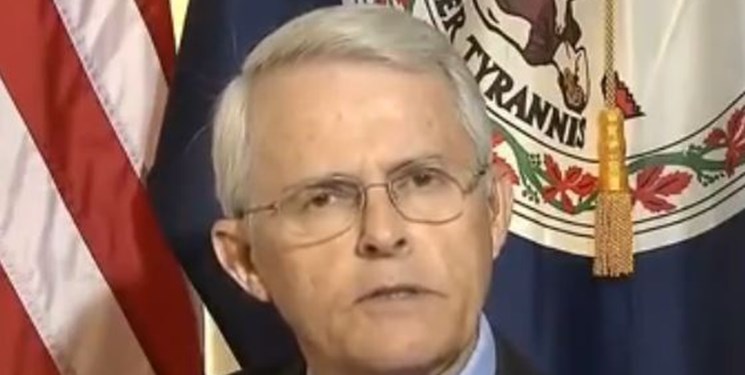 TEHRAN (FNA)- Richard Black, former State Senator of Virginia, says Washington has been cooperating with terrorists to destabilize Syria, by order of Tel Aviv, and for the interest Ankara and Riyadh.

In an exclusive interview with FNA, Senator Black said Israel included hostility toward Syria into the US West Asian policy, and added, “[A Clean Break: A New Strategy for Securing the Realm] was submitted to Israeli Prime Minister Benjamin Netanyahu, who made changes but agreed with the overall strategy… Israel abandoned the decades-old “land for peace” strategy for Palestine, and replaced it with an aggressive new strategy toward its neighbors, anticipating hostility toward Syria, Iraq, Lebanon, and Iran…”

“Saudi foreign policy was aimed at toppling the Syrian government, and the US plans facilitated their objectives […] Wahabi clerics from Saudi Arabia were intent on radicalizing Sunni Muslims and imposing harsh Sharia Law on Syria and surrounding countries. Furthermore, Syria had angered Saudi Arabia and Qatar by denying them permission to lay oil and gas pipelines across Syrian territory. They intended to get their way by force”, he added.

Senator Black further added, “Recep Erdogan hoped to capture Aleppo, the industrial heartland of Syria, just 50 miles from the Turkish border. As a result of the war, Turkey looted machinery from 1,000 of Aleppo’s finest industrial plants. Erdogan hoped to incorporate the city into Turkey after the war.”

Richard Hayden Black is a Republican politician. He served as a member of the Virginia State Senate from 2012 to 2020. Black was previously a member of the Virginia House of Delegates from 1998 to 2006. He has frequently praised the Syrian government while criticizing US foreign policy in the Arab country. In 2014, the outspoken Virginia State Senator wrote a letter in praise of Syrian President Bashar al-Assad, and later met him twice in his travels to Syria. In 2015, Daesh included Senator Black in a list of its enemies.

Q: Three US Presidents over 10 years have waged war on Syria. What is the US objective in Syria?

A: There were several motivations for launching the war against Syria. The Syrian War was intended to weaken Syria and compel it to serve Israeli, Turkish and Saudi ambitions on the region.

The foundation for present US Middle East policy—and for policy in Syria--began with a document called, A Clean Break: A New Strategy for Securing the Realm. The paper was advanced by a group of globalists headed by Richard Pearl in 1996.

The policy was submitted to Israeli Prime Minister Benjamin Netanyahu, who made changes but agreed with the overall strategy. Under it, Israel abandoned the decades-old “land for peace” strategy for Palestine, and replaced it with an aggressive new strategy toward its neighbors, anticipating hostility toward Syria, Iraq, Lebanon, and Iran. US alliances with Jordan and Turkey would advance its objectives. Students of Middle East policy must understand A Clean Break in order to understand Western strategy in the region today.

The “Clean Break” strategy triggered CIA-sponsored wars of aggression against a number of Arab nations. American troop use was minimized through heavy reliance on terrorists armed by the US and other nations.

Saudi Arabia and Qatar helped implement the “Clean Break” strategy by serving as a conduit for arming and funding Daesh, al-Nusra and many other al Qaeda-linked terrorists.

Wahabi clerics from Saudi Arabia were intent on radicalizing Sunni Muslims and imposing harsh Sharia Law on Syria and surrounding countries. Furthermore, Syria had angered Saudi Arabia and Qatar by denying them permission to lay oil and gas pipelines across Syrian territory. They intended to get their way by force.

The US had no difficulty enlisting Turkey in its scheme. Recep Erdogan hoped to capture Aleppo, the industrial heartland of Syria, just 50 miles from the Turkish border. As a result of the war, Turkey looted machinery from 1,000 of Aleppo’s finest industrial plants. Erdogan hoped to incorporate the city into Turkey after the war.

CIA-controlled warehouses in Turkey have served as massive weapons depots for al Qaeda-linked terrorists throughout the conflict. And when Daesh seized Northern Syria, Turkey became the terrorists’ closest ally and trading partner.

For now, the federal bureaucracy, NATO, and globalist organizations continue to support continued warfare in the Middle East. Their aggression is cruel and relentless. Under the guise of fighting the War on Terror, the US and NATO have cooperated with Al-Qaeda, MEK, and even Daesh, using them as foot soldiers to destabilize targeted nations.

Q: US Democrats expressed concerns after former US President Donald Trump ordered the attacks on Syria in retaliation for an alleged chemical weapon attack, saying the attacks were against the US laws. The same order was issued by President Biden. What is your take?

A: First, there is no convincing evidence that Syria has ever used sarin gas against anyone. Early in the war, Syrian forces were being driven back on multiple fronts by a dozen divisions of heavily armored jihadists. Not once was a jihadist brigade hit with sarin gas. Only civilians were attacked--never soldiers.

In 2013, newspapers reported that the Turkish Republican prosecutor in Adana had indicted six members of the al Qaeda-linked al-Nusra Front and Ahrar al-Sham for acquiring chemicals to produce sarin gas.

The Turkish prosecutor was mysteriously taken off the case, and the terrorists were released and permitted to cross the border into Syria shortly before the infamous sarin gas attack on the Ghouta suburb of Damascus.

Two courageous Turkish MPs were immediately charged with treason after later publicizing a 132-page indictment that disclosed that secrets of wiretaps used to track the plans of the 11 terrorists. The jihadists were said to be in possession of 2.2 kg of sarin gas for movement across the border into Syria.

That question cannot be answered without admitting that Assad did not employ gas—someone else did. Instinctively, journalists know that asking that question would end one’s career.

The attack on Ghouta was a pretext for the US to attack Syria. Fortunately, the public rose up in protest, blocking Obama’s plan. Five years later in 2018, Secretary of Defense James Mattis finally admitted that we have no evidence that Syria has ever used sarin gas.

Sarin gas attacks were repeatedly used to justify bombing attacks on Syria. But there are no motives for Syria to use sarin gas, and compelling reasons for the terrorists to do so.

Whenever one political party or the other criticizes a sitting president for bombing Syria, little comes of it. Few politicians are willing to confront the military industrial complex, since companies in their home states make enormous profits from sales of arms used to attack Syria. It is always easier for them to look the other way. At least for now.

Q: Is there justification for the US President to authorize a military strike that is not in self-defense against an imminent threat without the congressional authorization?

As far as American law is concerned, the authority of the president to direct military strikes is complicated by internal conflicts within the US Constitution and by the laws subsequently enacted by Congress to rein in the president’s power.

The US Constitution designates the president as the Commander in Chief. In theory, it gives Congress the sole power to declare war. In practice, however, the US president has power to dispatch armed forces, and since wars are seldom declared formally, the generations-long practice of Congress acquiescing to undeclared wars has eviscerated Congressional authority in this arena.

Congress has attempted to moderate presidential authority by enacting the War Powers Resolution of 1973 (codified as 50 USC sec. 1541-1548). That law says the US president can only send Armed Forces into action abroad following a declaration of war by Congress or in case of a national emergency caused by an attack on the United States, its territories, possessions, or armed forces. The War Powers Resolution requires the president to notify Congress within 48 hours after commencing a military action. It forbids him from remaining engaged for over 60 days without Congressional authorization for the continued use of military force.

Unfortunately, most Americans have minimal comprehension of events overseas. The political parties may harshly criticize one another’s domestic policies, but most Republicans and Democrats readily accept any excuse for attacking foreign nations.