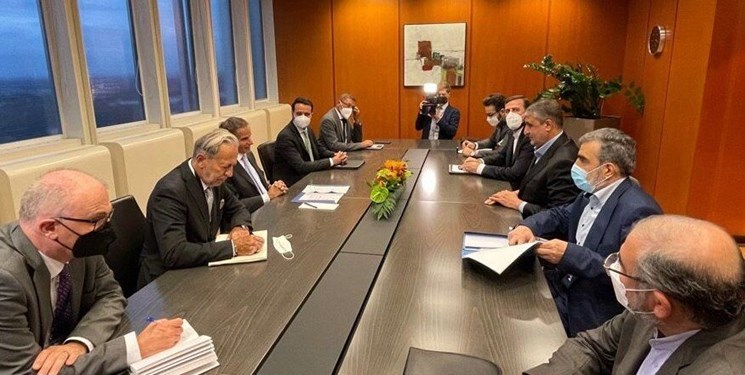 TEHRAN (FNA)- The Atomic Energy Organization of Iran (AEOI) and the International Atomic Energy Agency (IAEA) agreed to keep on their cooperation on the basis of mutual respect and good faith.

The AEOI Chief Mohammad Eslami and IAEA Director-General Rafael Grossi reached the agreement during their talks in Austrian capital of Vienna on Monday evening.

Earlier, AEOI Chief Mohammad Eslami, who is in Vienna to take part in the 65th General Conference of IAEA, met and held talks with his Russian counterpart, the Director-General of Russian State Atomic Energy Corporation (ROSATOM) Alexey Likhachev.

The 65th General Conference of the IAEA was underway with the participation of representatives of 171 countries.

In relevant remarks earlier on Monday, Eslami called on the UN nuclear watchdog to refrain from making politically-tainted decisions, and stressed the need for US to remove sanctions against Tehran in a verifiable manner.

"The so called maximum pressure policy was doomed to fail and the US administration should abandon its addiction to unilateral sanctions and respect international law. Now, it is the time to rectify the wrong policies and initially remove all sanctions in a practical, effective and verifiable manner," Eslami said, addressing the IAEA's 65th General Conference in Vienna on Monday.

He also referred to Iran's long-term cooperation with the IAEA, and said, "Although, Iran has always cooperated with the Agency, at the same time, it is necessary that the IAEA avoids politicization and maintains its independence, impartiality and professionalism."

"Iran’s experience in nuclear field dates back to mid-1950s and in 1958 Iran has joined the IAEA. Since 1960s, Iran has begun working on nuclear R&D and its first nuclear research center was established in the mid-1960. In early 1970s, Iran has planned to build nuclear power reactors, and for this many experts and technicians were trained in highly qualified research and training centers around the world. Bushehr Power Plant is the first operationalized nuclear power plant in Iran."

"The inevitable trend of rising demand for energy, along with the similar rising preference for increased reliance on clean and safe sources, as well as other rising demands in areas such as health, medicine, water, food and agriculture, and the manufacturing industry in general, are all facts of our life; however, the challenges are outpacing the partnership to address them by utilizing the technological advances. There is a dire need for the international community to collectively take steps in addressing the emerging challenges. Turning blind eyes to the challenging issues is not a viable option and such an ignorance policy would progressively backfire on all of us in the long run," Eslami said.

"The Agency, as per its Statute, is mandated to assist Member States in developing the peaceful use of nuclear energy indiscriminately. The Agency is also entitled to strengthen the area of technical cooperation with due consideration for member states’ needs and priorities, and as such, to help them achieve their Sustainable Development Goals through sharing of knowledge and experience and transfer of technology and equipment without any types of discrimination and political objectives. The areas within the realm of peaceful nuclear activities, falling under the IAEA’s umbrella, can certainly be strengthened by our collective efforts and cooperation."

"Unfortunately, the US has not sufficed to re-imposing its previously lifted unilateral sanctions, but also exerted and continues to exert pressures on the others, be it public or private, to follow suit, in defiance of the UNSC Resolution 2231 (2015). These pressures and sanctions are not necessarily restricted to trade related matters, but also extended to the peaceful and humanitarian applications of the nuclear science and technology, even by imposing sanctions on radiopharmaceutical production facilitates and Iran’s Nuclear Regulatory Body, in contradiction with the letters and spirit of the IAEA Statute. Such an irresponsible and inhuman behavior by the US is endangering the lives of hundreds of thousands of patients in dire need of those radiopharmaceuticals.

Despite all difficulties, the Islamic Republic of Iran, promised and assured by the remaining parties of implementation of their commitments, decided to remain in the deal and continue to constructively and closely work with the Agency, while not benefiting from the deal. This fact has been verified by the IAEA for 15 consecutive times."

"Although, Iran has always cooperated with the Agency, at the same time, it is necessary that the IAEA avoids politicization and maintains its independence, impartiality and professionalism," Eslami underlined.

"In this context, only after about two and a half years of continued proliferation of inclusive economic sanctions against different sectors of Iran’s economy by the U.S and lack of practical actions by the E3/EU in meeting their commitments, on 2nd December 2020, Parliament of the Islamic Republic of Iran passed a law, which required the Government to stop the implementation of all verification and monitoring activities beyond Iran’s Comprehensive Safeguards Agreement, in case of the continuation of non-compliance of the participants of the deal within two months after the entry into force of the law. The so called maximum pressure policy was doomed to fail and the US administration should abandon its addiction to unilateral sanctions and respect international law."

"Now, it is the time to rectify the wrong policies and initially remove all sanctions in a practical, effective and verifiable manner," he said.

"His Excellency Ayatollah Dr Seyed Ebrahim Rayeesi, the president of the Islamic Republic of Iran, has stated that his government wants results-oriented negotiations, with the goal of lifting the unjust pressures and sanctions imposed on Iranian nation," Eslami said.

"Let me now briefly elaborate on our position on other issues related to Agency’s activities under its Statute. As it is stated in several decisions and resolutions approved by the General Conference, any attack against nuclear installations used for peaceful purposes is contrary to international law and all armed attacks against nuclear installations devoted to peaceful purposes should be explicitly prohibited. Regrettably, the inaction of the United Nations and the IAEA in dealing with terrorist acts against peaceful nuclear facilities, has emboldened perpetrators to continue and even increase their blatant defiance of the most basic and fundamental principles of international law and the United Nations Charter. It is highly imperative that this matter be immediately attended to by the Agency to not only safeguard the nuclear installations against such actions or threats, but also the credibility of the Agency."

"We reiterate our conviction that the main remedy for the existing threats emanating from the nuclear weapons, lies within full and verifiable nuclear disarmament. We call for full implementation of Article VI of NPT and express our deep regret that not only the nuclear weapon States stand firm on retaining their arsenals and delivery systems, but also some of them actively pursue to modernize them," he added.

"Success in achieving global security, first and foremost, depends on the effective compliance of nuclear-weapon states with their obligations under NPT, including through desisting discriminatory approaches and policies. We believe, as a matter of principle, that the meaningful promotion of global and regional peace and stability hinges, inter alia, on disarmament alongside with strengthening of the non-proliferation regime," Eslami underscored.

"Iran as the initiator of establishing Nuclear Weapon Free Zone in the Middle East since 1974, reiterates its deep concern over Israeli clandestine military nuclear program. Unfortunately, despite the adoption of the resolution of the NPT Review Conference in 1995 and also its followed-on Action Plans in 2000 and 2010, the Zionist regime still has not put its nuclear activities and facilities under the Comprehensive Safeguards Agreement of the Agency, continued its terroristic acts against peaceful nuclear installations, assassinated nuclear scientists and thereby endangering stability and the security of the region as well as the integrity and credibility of the NPT and the IAEA."

"Nuclear safety has always been among our highest priorities and we attach great importance to strengthening the relevant safety regulations. The Islamic Republic of Iran reaffirms that the responsibility for nuclear safety and nuclear security rest, entirely with the Member States."

"Simultaneously, Iran’s nuclear safety regulatory has established a good cooperation and assistance linkage with the IAEA, which we sincerely appreciate its support. Iran is also committed to take advantage of lessons learnt by other countries including through actively participating in, and holding workshops and technical meetings in this regard," he added.

"On the nuclear security, we believe that the undertaken measures should neither hamper the international cooperation in the field of peaceful nuclear activities, nor should it undermine the established responsibilities of the Agency under its Technical Cooperation Program. We believe that issues related to terrorism and cyber attacks are the most significant nuclear security threats. The sabotage and terrorist acts against nuclear facilities need to be condemned by the Agency and its Member States. As you know, my country’s IAEA safeguarded installations have been under sabotage and terrorist attacks for several times. It is clear that Iran will defend itself by all possible means and manners, but it is a necessity that the world community unequivocally and strongly condemns and take a stand on the act of terrorism against safeguarded nuclear installations."

"In conclusion, we look forward to a day when the motto of peaceful use of nuclear energy for all and nuclear weapon for none, is universally recognized and materialized. This message, if realized, would accelerate and enlarge the contribution of atomic energy to peace, health and prosperity throughout the world."

Eslami stressed that Iran is cradle of civilization and a peace loving country which historically has contributed to the global science and technology, adding, "In this context, we are determined to pursue our nuclear programme and activities which are exclusively for peaceful purposes and as stated by our President during SHANGHAI Summit on 17th September 2021, 'nothing could halt the Iranian peaceful nuclear activities which will be conducted in the framework of international rules and regulations'."

In relevant remarks earlier this month, Eslami had also blasted the IAEA for lack of assistance to Tehran in developing its peaceful nuclear program in compliance with the duties enshrined in the statute of the UN nuclear agency.

“The IAEA Statute emphasizes that assisting, empowering, enabling and facilitating the peaceful use of the nuclear industry in all countries is the IAEA’s responsibility, but that is quite the opposite for our country, and the IAEA does not help us,” Eslami said.

He also referred to Iran’s nuclear deal with the world powers, and said the agreement’s nuclear segment includes undertakings that are only aimed at confidence-building.