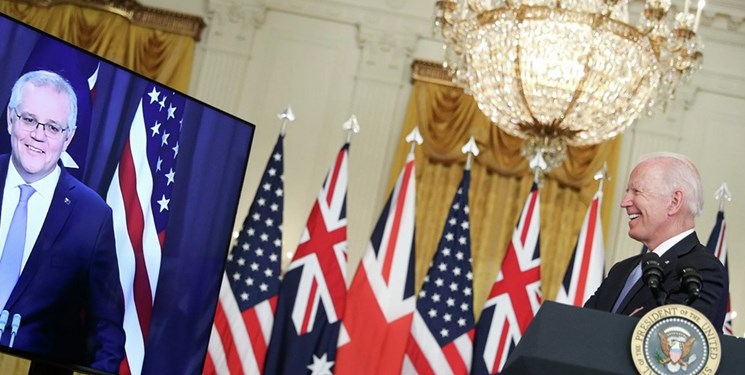 TEHRAN (FNA)- European Union officials rallied around France amid the diplomatic flap over the surprise announcement of a new US, British and Australian security pact, with one top official warning that something appears to be “broken” in the transatlantic alliance and recommending a freeze in technology and trade talks.

“There is of course in Europe a growing feeling that something is broken in our transatlantic relations,” Thierry Breton, the EU’s commissioner for internal markets, told the Financial Times in an interview published Tuesday.

“It’s true that we hear some voices in Europe saying that probably after what happened over the past two months, it may be a good idea to reassess everything we are doing, and our partnership,” the official added – referring to France’s efforts to push Brussels into postponing a US-EU trade and technology council meeting in the wake of the AUKUS deal.

Breton suggested that postponing the trade and technology council may be a good idea, since while “there are a lot of things that we can see pretty clearly…we can bring and will bring to the US, maybe it’s not always clear what the US can bring to us.”

Stressing that he is a “strong believer” in transatlantic cooperation, Breton nevertheless suggested that US and European interests “should match” for any collaboration to be fruitful.

On Monday, EU Foreign Policy Chief Josep Borrell told reporters on the sidelines of the United Nations General Assembly that the bloc’s foreign ministers had “expressed clear solidarity with France” over the AUKUS deal, and suggested that the agreement’s “announcement ran counter to calls for greater cooperation with the European Union in the Indo-Pacific”.

Borrell stressed that “more cooperation, more coordination, less fragmentation was needed to achieve a stable and peaceful Indo-Pacific region where China is the major rising power”, and expressed regret that EU countries were not invited to join the new bloc.

European Council Chief Charles Michel echoed the remarks coming out of the French Foreign Ministry in recent days about AUKUS members’ moves to “betray” and “stab France in the back”, telling reporters Monday at the UN that the AUKUS agreement and sub deal violated “the elementary principles” of “transparency and trust” among allies.

“And what do we observe? We are observing a clear lack of transparency and loyalty,” he suggested.

Michel emphasized that Europeans would need to “clarify and try to understand better what are the intentions behind this announcement”, and suggested the AUKUS deal would ‘reinforce’ a European effort to build an independent defence capacity independent NATO.

On September 15, Australia, the United Kingdom and the United States announced the creation of a new security bloc known as AUKUS. The military pact will enable Canberra to build a fleet of 12 nuclear submarines in Australian shipyards using American and British nuclear reactor technology.

The agreement also includes other components, including artificial intelligence, cyberwarfare, and the stationing of additional US troops and naval capabilities in Australia.

The agreement was seen as a major snub to France, which had already agreed to build the nuclear-powered attack subs for Australia for a whopping A$90 billion (equivalent to $65 billion US or 47.7 billion British pounds).

Paris responded to the “stab in the back” by recalling its ambassadors to the United States and Australia over their “unacceptable behaviour”, and by the scrapping of a planned Anglo-French defence summit. France has also applied pressure to delay the signing of an Australian-EU free trade deal.

On Monday, Elysee Palace accused Canberra of deliberately leading Paris on over the submarine agreement while secretly negotiating with the US and Britain on the AUKUS deal, and slammed the United States for keeping negotiations under wraps and never answering any of France’s questions on the matter. The palace said it began to suspect that something was fishy in June.

While the palace and the French Foreign Ministry have discussed a reappraisal of relations with the US and Australia, senior French opposition figures, including former Sarkozy Government Minister Xavier Bertrand and La France Insoumise leader Jean-Luc Melenchon, have suggested that the slap in the face should cause France to reconsider its membership in NATO.

France was not the only country to express concerns over the implications of AUKUS, or to feel kept in the dark about the top-secret talks. Russia, China and North Korea expressed concerns that the pact could serve as a “prototype” for an “Asian NATO”, or destabilize the Asia-Pacific region and spark a new arms race.

Washington’s Indian partners, meanwhile, marked concerns over the AUKUS deal, with observers suggesting it calls in to question the relevance of the so-called Quad alliance of India, the US, Japan and Australia, as well as the reliability of the US as a partner to New Delhi. Officials in Canada were also apparently caught off guard by the agreement, only learning about it when it was announced on September 15.

Sources told the Globe and Mail that Ottawa was made to feel the “weak sister” in the so-called Five Eyes intelligence-sharing alliance with the US, the UK, Australia and New Zealand (Wellington was also left out of AUKUS).