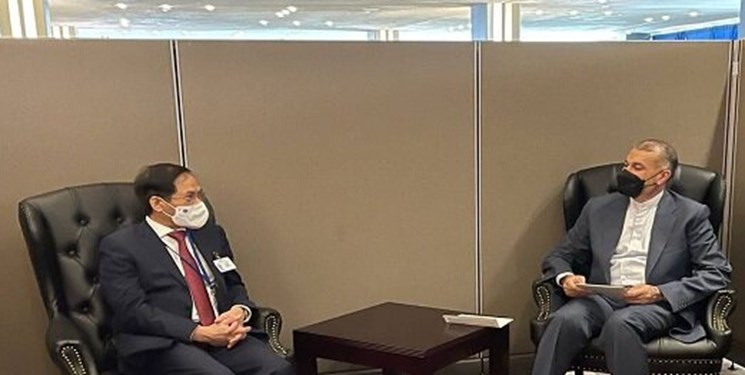 During the meeting held on the sidelines of 76th UN General Assembly (UNGA) meeting, the Iranian and Vietnamese foreign ministers explored avenues for bolstering and reinvigorating bilateral relations.

Amir Abdollahian, meantime, thanked Vietnam for its principled approach towrds the Islamic Republic of Iran at the United Nations.

He also voiced Iran's readiness to export Iranian-made vaccines to help improve the situation of coronavirus in Vietnam.

The Iranian foreign minister also said that Iran is ready to cooperate with Vietnam in industrial, agricultural, and tourism fields.

He called for setting up Iran-Vietnam Joint Economic Commission as soon as possible.

The Vietnamese foreign minister, for his part, thanked the unsparing support of Iran at the international organizations.

He then presented a comprehensive report on the latest situation of the COVID-19 pandemic and welcomed the cooperation of Iran with Vietnam in the fields of economy, investment, science, and technology.

In a relevant development earlier on Thursday and in a meeting with his Venezuelan counterpart Felix Plasencia, the Iranian foreign minister said the two countries would continue joint efforts to counter the US sanctions, emphasizing resistance and a focus on domestic capacities.

Amir Abdollahian hailed Venezuela's resistance and victories against the United States, which he said were a testament to the fact that the will of the people is stronger than that of the hegemonic powers.

He added that the Islamic Republic has set no limit on the expansion of bilateral relations with the Latin American country.

For his part, the Venezuelan foreign minister said Caracas would do its utmost to promote relations with Tehran, adding that mutual ties have shown that geographical distance cannot hinder cooperation among independent states.

In another meeting with Iraqi President Barham Salih, the top Iranian diplomat expressed Tehran’s readiness to improve strategic ties with Baghdad in various fields, urging the two sides to make use of their great capacities in this regard.

The Iraqi president thanked Iran for its efforts to help his country over the past years and said Baghdad is resolute on the promotion of inclusive cooperation with Tehran.

Amir Abdollahian told Turkish Foreign Minister Mevlut Cavusoglu that Iran is ready to host sessions of a joint commission with Turkey, which have been delayed for some time.

During a meeting, the Iranian foreign minister stressed the importance of holding regular consultations between the two neighboring countries especially in light of the new developments in the region.

He said Iran is in contact with all parties in Afghanistan and urged the formation of an inclusive government in the country as the only way to establish endurable peace and stability.

The Iranian foreign minister also extended to Cavusoglu an official invitation by President Ebrahim Raeisi to his Turkish counterpart Recep Tayyip Erdogan to pay a visit to Tehran.

Amir Abdollahian and Cavusoglu agreed that a meeting among foreign ministers of Iran, Turkey and Azerbaijan would be held in Tehran.

The Turkish foreign minister, for his part, said all unilateral and unlawful sanctions against Iran should be lifted.

He added that Iran and Turkey face common regional challenges, including the crisis in Afghanistan, and called on both sides to maintain close consultations.

Cavusoglu expressed his concern over the escalation of violence and extremism in Afghanistan and stressed the importance of the formation of an inclusive government in the country.

Amir Abdollahian also met his Hungarian counterpart on Wednesday on the sidelines of the United Nations General Assembly.

Amir Abdollahian and Péter Szijjártó discussed bilateral and international issues, including economic relations, educational cooperation, and the situation in Afghanistan.

Iranian top diplomat proposed holding a joint commission as early as possible to make a roadmap for Tehran-Budapest ties.

He said that over 4,000 Iranian students were studying in and the same number was graduated from Hungarian universities and this could be a basis for deepening of ties.

Szijjártó referred to his trip to Iran in 2015 and said that his country was ready to hold joint economic commission in Tehran.

He said that the US sanctions have caused problems in Iran-Hungary relations, but Budapest has tried to boost ties again.

Hungarian Foreign Minister proposed to donate 100,000 doses of Sinopharm COVID-19 vaccine and Amirabdollahian accepted to receive them to be administered to Afghan refugees in Iran.

Amir Abdollahian also had a meeting with Namibian Foreign Minister Netumbo Nandi-Ndaitwah during which he underscored the importance relations with Africa for the new administration in Iran, highlighting Iran’s support of Namibia’s fight for independence.

The two discussed the problems occurred in the good trade relationship between Iran and Namibia and the how to solve them. Amir Abdollahian invited Namibian Foreign Minister to pay a visit to Iran.

Nandi-Ndaitwah pointed out that Iran was among the first countries to establish diplomatic ties with Namibia, saying that her country was ready to expand ties with Iran on trade, mining, agriculture, health and medicine.

She also underlined that Namibia has tried to keep ties with Iran despite the obstacles caused by the US sanctions.

Meantime, ministers of foreign affairs of Iran and Belarus in a meeting in New York on Wednesday emphasized the need for expansion of bilateral economic ties.

The meeting of the Iranian and Belarus foreign ministers, Hossein Amir Abdollahian and Vladimir Makei was on the sidelines of the UN General Assembly and the two sides in it exchanged viewpoints on bilateral ties and economic cooperation between the two countries.

The Belarus foreign minister in the meeting emphasized on Minsk’s will for implementing the reached agreement in last week meeting between the two countries’ presidents on the sidelines of the last week's Shanghai Cooperation Conference in Dushanbe.

“The oppressive sanctions imposed against both countries can only face defeat based on our joint cooperation,” said Makei.

He emphasized that his country is ready for comprehensive cooperation with Iran and establishment of a balanced economic relation with Iran.

Makei referred to the numerous meetings at technical level between the two countries, noting that implementing the reached agreements is in need of the existence of strong political will.

The Iranian foreign minister, for his part, said in the meeting that the two presidents' meeting was quite fruitful, and the Islamic Republic of Iran is ready for opening and new path for improvement of bilateral ties.

Amir Abdollahian expressed regret that the volume of bilateral trade has decreased despite the reached agreements, reiterating that Iran is ready for serious cooperation with Belorussia in such fields as industrial and heavy machines, agricultural machines, electrical buses, car spare parts, and agricultural items.

Amir Abdollahian said that it is also possible to use the Eurasia Economic Union (EAEU) for expansion of bilateral ties.

Iran’s foreign minister said in New York on Wednesday that Tehran’s will is defining balanced relations with Europe, adding that the Iran-EU relations should not be subjected to the unconstructive behavior and approach of the United States.

Hossein Amir Abdollahian made the comment in a meeting with his Spanish counterpart José Manuel Albares, during which the latest conditions in Afghanistan, Iran’s relations with the European Union, bilateral relations, and other issues of mutual interest were discussed.

Amir Abdollahian referred to the 400-year old record of the Iran-Spain relations, emphasizing the need for serious efforts aimed at improving the two countries comprehensive ties.

“The two countries’ relations in the political, economic, and parliamentary fields are on the right path, but new plans need to be devised in the fields of health, industrial, science and technology, cultural, tourism, bartered transactions, private sector companies and such other fields,” said Iran's top diplomat.

He appreciated the two countries’ cooperation in health and medical fields during the coronavirus disease peaks and an “unforgettable point” in the bilateral cooperation.

Amir Abdollahian in this meeting also referred to the banking problems with which the Iranian university students are faced with, expressing hope that the two countries’ cooperation will lead to solving them.

The Iranian foreign minister emphasized that Tehran’s will is establishment of a balanced relation with the EU, reiterating that Iran’s relations with Europe should not be subjected to the unconstructive behaviors of the United States with Iran.

“In the foreign policy of the new Iranian government relations with Europe, including the entire countries in the green continent, is a priority, and that is not restricted to the EU troika countries,” he said.

The Spanish foreign minister, for his part, while agreeing with the points made by his Iranian counterpart emphasized that Spain makes its entire efforts aimed at improving the level of its political and economic ties with Iran, and that is the reason why Spain decided to join the INSTEX.

José Manuel Albares referred to the declining trend of bilateral commercial ties ever since the year 2018, emphasized that these conditions need to be changed relying on the joint efforts of both countries.

The Spanish foreign minister also exchanged viewpoints with his Iranian counterpart on Afghanistan developments, announcing that his country is ready for assisting in vaccination of the Afghan immigrants in Iran.

In a meeting with Amir Abdollahian in New York, Ireland's foreign minister said that his country is ready to take any action necessary to revive and maintain the nuclear deal, known as the JCPOA.

Irish top diplomat Simon Coveney made the comments in a meeting with Iran’s Foreign Minister Hossein Amir Abdollahian on Wednesday on the sidelines of the UN General Assembly to discuss bilateral relations and cooperation, the Iran nuclear deal, and the situation in Afghanistan.

During the meeting, the Irish foreign minister congratulated Amir Abdollahian on his appointment as foreign minister and said it was a great pleasure for him to visit Iran as the first top Irish diplomat in the last 20 years. Coveney expressed hope that this trip would serve a cornerstone to expand relations between the two countries. Coveney also said the final stages of reopening the Irish embassy in Tehran were under way.

The Irish Foreign Minister expressed his satisfaction with his country's readiness to play a facilitating role in the implementation of the UN Security Council Resolution 2231 during Trump's presidency in the US.

He said Ireland is now ready to take any action necessary to revive and maintain the nuclear deal, known as the JCPOA.

Referring to the two dimensions enshrined in the JCPOA, namely Iran’s nuclear program and the removal of anti-Iran sanctions, Coveney reiterated his country's commitment to these two dimensions and lamented Trump's actions that have led to the current situation.

The Iranian foreign minister also welcomed the imminent reopening of the Irish Embassy in Tehran, describing the growth of relations between the two countries as good, but stressed the need to expand these ties.

He called for the cooperation of the two countries to be extended to other areas in addition to the current spheres, including agriculture, renewable energy and trade cooperation.

Amir Abdollahian stated that by resorting to creative solutions, the problems related to banking and financial exchanges can also be solved.

Elsewhere, the Iranian foreign minister said the new administration in Tehran is committed to the Vienna talks, but is now reviewing them carefully and quickly. He voiced regret over Washington’s complete violation of its commitments and the European troika’s inaction under the JCPOA. Amir Abdollahian stressed that achieving a logical result requires a change in the approach of the United States and Europe. The two sides also exchanged views on the latest developments in Afghanistan.