France to Send Ambassador Back to US After Macron-Biden Call 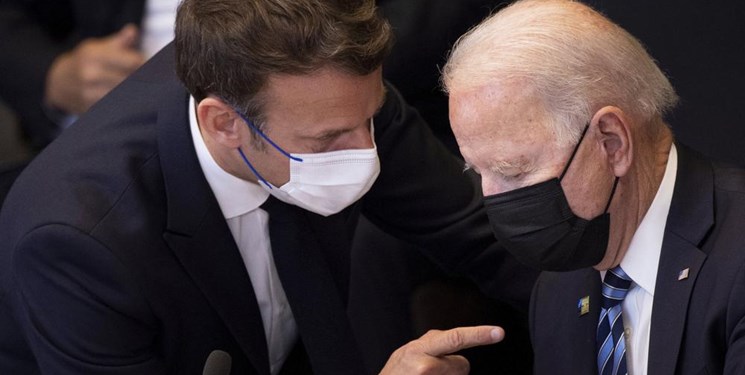 TEHRAN (FNA)- France agreed to return its ambassador to the US and President Joe Biden has vowed not to cut Paris out of key future defense decisions in the Indo-Pacific after a phone call designed to calm French fury after he struck a submarine deal with Australia and the UK behind President Emmanuel Macron’s back.

In a joint statement, issued after the phone call ended a five-day standoff between the leaders, the two men agreed to meet in Europe in late October, probably at the G20 summit, to discuss how to improve consultations in future, The Guardian reported.

Macron said he would dispatch his withdrawn ambassador back to Washington next week, but there was no sign that the US or Australia would go back on their decision to work together on building nuclear-powered submarines, a decision that led Canberra to cancel its €56bln contract for the French to build diesel-based submarines.

Biden instead stated the US would be supplying extra help to the French-led anti-terrorist operations in the Sahel. The joint statement also sought to remove any suggestion that the US regarded the independently minded French as unreliable partners in the efforts to constrain China in the Indo-Pacific, the chief unstated purpose of the Aukus pact.

While the text stopped short of an apology and offered no practical remedy, it did concede that the French should have been better consulted, and deserve to be so in the future.

“The two leaders agreed that the situation would have benefited from open consultations among allies on matters of strategic interest to France and our European partners. President Biden conveyed his ongoing commitment in that regard,” the statement read.

It added, “[The] two leaders have decided to open a process of in-depth consultations, aimed at creating the conditions for ensuring confidence and proposing concrete measures toward common objectives … President Biden reaffirms the strategic importance of French and European engagement in the Indo-Pacific region.”

The meeting in October is being billed as “a chance to reach shared understandings and maintain momentum in this process”.

Although the US and UK have said there was no attempt to exclude France from defence operations in the Indo-Pacific, the secrecy surrounding the pact and some of the rhetoric in its announcement left a strong sense that the three countries regarded their English-speaking alliance as the core to the US’s strategy against China.

A French government spokesperson before the call said it would be a chance to clarify the way in which the announcement was made and how the US could re-engage in its relationship with an ally.

France last week announced it had been stabbed in the back by the US and described Biden’s treatment of his European partners as reminiscent of former President Donald Trump.

Biden, who promised relentless diplomacy in his speech to the UN general assembly on Tuesday, had been seeking to speak to Macron since the weekend. The Élysée withdrew its ambassadors to Washington and Canberra on Friday for consultation, in a signal of deep anger over the month-long secrecy surrounding the security pact that France feels deprives it of a valuable defence contract and undercuts the main pillar of its carefully established Indo-Pacific strategy.

Washington appeared to have been taken aback by France’s fury but recognised it needed to find a way to contain a row that risked damaging Biden’s reputation in Europe.

Catching the tone of anger in France, Bernard Guetta, a Macronist MEP, described Biden’s sidelining of France as “a blunder, amounting to a strategic blindness that will only benefit the Chinese”.

The French government also issued a statement denying a front-page report in The Daily Telegraph suggesting Macron was discussing giving up France’s seat on the UN security council to the EU.

In denying the report, the French government described the Telegraph, a paper that the UK Prime Minister, Boris Johnson, used to write for, as an “English tabloid”.