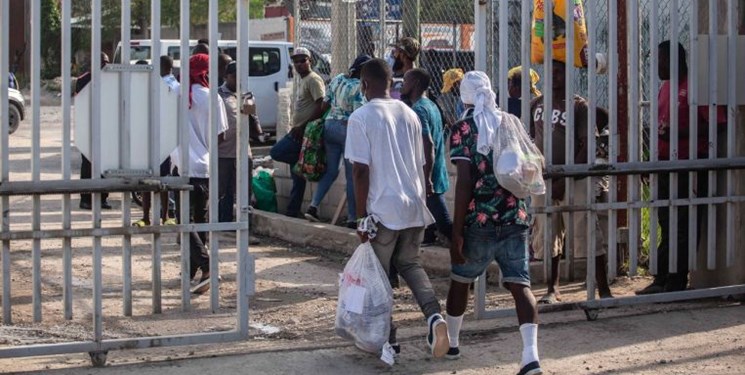 TEHRAN (FNA)- The administration of President Joe Biden said that it has temporarily suspended the use of horse patrols in Del Rio, Texas as it works to ramp up controversial repatriation flights of Haitians camped under a bridge near the border.

“We have ceased the use of the horse patrol in Del Rio temporarily,” a DHS official said on a call with reporters, The Hill reported.

But even as DHS paused horse patrols amid an investigation into officers seen dispersing migrants on horseback, it is rapidly processing what was an estimated 14,000 Haitians camped on the Texas side of the border.

“As of this morning, we were at around 4,050 individuals under the bridge so we have really made tremendous progress over the last 72 hours in drawing down the population under the bridge,” a DHS official said.

That population dip comes as the US is expected to expel a large number of those Haitians under Title 42, which allows the US to remove migrants without giving them the chance to seek asylum.

“We are increasing the frequency and number of the repatriation flights each day,” DHS Secretary Alejandro Mayorkas told lawmakers Tuesday, when the department had expelled roughly 500 Haitians.

DHS officials said Thursday that 1,400 people had been removed to Haiti after completing 13 different flights.

Another 3,200 are in DHS custody awaiting their fate.

DHS officials repeatedly declined to provide figures for how many Haitians had been released into the US under another provision of the law called Title 8.

“We are still under Title 42 because we are in a global pandemic, so we are still operationalizing that,” White House Press Secretary Jen Psaki said Thursday.

“If people are not are not expelled under that, then there are a range of options. Either they are put into an alternative to detention, where biometric data is required, they're given a notice to appear or they're put in an ICE facility,” she said, referring to US Immigration and Customs Enforcement.

The repatriation flights are continuing despite strong pushback from many members of President Biden’s own party.

"I'm unhappy with the administration. We are following Trump politics. He is the one who does not follow the Constitution and would not allow those seeking refuge to be able to petition to get into the country," Rep. Maxine Waters (D-Calif.) said Wednesday.