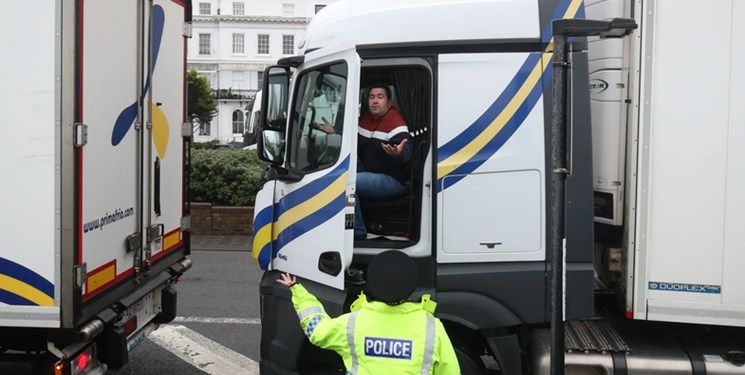 TEHRAN (FNA)- The government’s emergency programme to issue temporary visas to thousands of lorry drivers is far too little to resolve Britain’s supply-chain crisis and is unlikely to attract them to the UK, haulage chiefs warned.

Downing Street on Saturday night confirmed hastily compiled plans to add 5,000 HGV drivers and 5,500 poultry workers to a visa scheme until Christmas, to help the food and fuel industries with shortages, The Guardian reported.

However, even as the plans were formally announced, Marco Digioia, the head of the European Road Haulers Association which represents more than 200,000 trucking companies across the continent, told the Observer that “much more would be needed” than a temporary relaxation of immigration rules.

“There is a driver shortage across Europe,” he said, adding, “I am not sure how many would want to go to the UK.”

Andrew Opie, from the British Retail Consortium, said the 5,000 limit would “do little to alleviate the current shortfall”.

The criticisms emerged as the supply-chain crisis spread:

Digioia said European driver salaries were generally higher than in Britain; new EU rules had improved working conditions; and billions of euros had been offered to fund parking areas and support companies.

“The UK doesn’t have access to any of that,” he said, adding, “Tempting European drivers back to the UK when they also have to face the reality of customs and border checks, all the uncertainties of Brexit … We have to be realistic.”

Higher salaries, and perhaps tax incentives, might help in the short term, he said, but “a lot of money is being thrown at this whole problem in Europe right now. There’s a level playing field, and none of the Brexit-related hassle”.

The government said on Saturday night that it planned to train up to 4,000 people as HGV drivers, with the help of military examiners to speed up the process; and letters are being dispatched to recently retired drivers in an attempt to coax them back into the job.

There were also warnings on Saturday night that an impending shortage of the short-term workers needed to cope with the autumn demand for food pickers and packagers will intensify the crisis.

Two thirds (67%) of voters believe the government has handled the crisis badly, according to a new Opinium poll for the Observer.

Even a majority of Conservative voters (59%) thought that the government had responded badly. The majority (68%) said Brexit was partly to blame, including 88% of Remain voters and 52% of Leave voters.

As well as the shortfall in deliveries to supermarkets, the acute difficulties that have faced the hospitality sector are expected to widen.

Ian Wright, chief executive of the Food and Drink Federation, said that there could be as many as four million people who were available to companies at the beginning of last year but are no longer in the potential labour force.

He warned of another pinch point in just a few weeks, when agency staff would be needed to deal with the autumn and Christmas peak in demand.

“I’m absolutely certain that when we get to the end of September and when we start to look at the crucial role of agency workers in the Christmas rush, there won’t be enough available,” he said.

“The government needs to come to a pretty speedy resolution on lorry drivers. The question then is, if you call them, will they come?" he added.

“I think the only way we will find that out is by doing so. But you then get into what is a pretty obvious contest about which industry, which company, who can pay most. One in five orders for hospitality from suppliers do not make it. My guess is that several of the supermarkets are in a comparable position which is why there are shortages on the shelves,” said Wright.

There were also reports of ambulances and hospital staff being affected by petrol queues, after some petrol retailers said fuel deliveries were unable to reach some forecourts. South Central Ambulance Trust said that on Friday, its staff had “joined the queues with others to refuel which on some occasions has taken time”.

Matt McDonnell, the chief executive of Medicare EMS, which has a fleet of ambulances, said that several crews had struggled to get fuel on Saturday.

“This morning, we’ve had a crew driving round for over an hour,” he said, adding, “They found a garage that had a sign up saying ‘access to emergency vehicles only’. But our crew were rationed to just 30 litres of fuel.”

A crew member on an emergency shift in the East of England on Friday posted an angry message on Facebook.

Jennifer Ward wrote, “Imagine having to go to 5 DIFFERENT petrol stations to get diesel for your AMBULANCE.”

There were also reports that workers at a care firm in Kent had not been able to get to people’s homes because of lack of petrol.

There are serious warnings about the impact that higher prices, rising energy bills and the incoming cut to universal credit will have on the low-paid.

A typical low-income family with children could see their income fall by more than £20 a week over the next six months as a result of the “triple whammy”, according to the Resolution Foundation think tank.