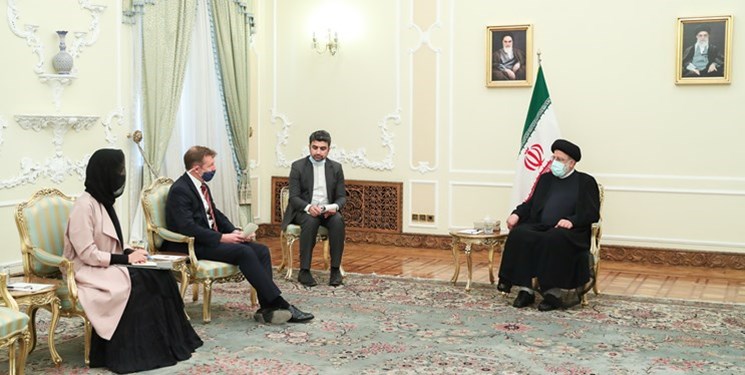 TEHRAN (FNA)- Iranian President Seyed Ebrahim Rayeesi in a meeting with new British Ambassador to Tehran Simon Shercliff said that his country never succumbs to pressures and bullying of the world powers.

“The Iranian nation enjoys the spirit of independence-seeking and freedom-seeking and whenever it feels that other countries are bullying, it does not surrender to it and shows a reaction,” Rayeesi said during the meeting in Tehran on Sunday.

He also underlined that Iran seeks relations and engagement with all countries based on mutual respect.

"The Islamic Republic of Iran wants cooperation and engagement with all countries, but this cooperation must be based on mutual respect and taking into account the interests of nations, and the hegemonic powers and the dominating system must not take control of these relations," Rayeesi said.

The president stressed that human rights have become a political means against other countries, calling on the new British envoy to Tehran to convey the realities about Iran to its own country.

Shercliff, for his part, said that this is the second time that he is serving as a diplomat for his country after twenty years from his first mission in Iran, stressing that he has good experience and knowledge of Iran and his main goal is to try to improve relations between the two countries with a positive and constructive approach.

Shercliff pointed to the history of Iran-Britain relations, and expressed the hope that a new era of relations between the two countries would be created and that he would play his role well in achieving that goal.

Earlier this week, Iranian Foreign Minister Hossein Amir Abdollahian in a meeting with Britain’s new Foreign Secretary Liz Truss rapped London and other European states for keeping mum and indifferent to the US moves against the nuclear deal.

The European attitude was helping “the US administration keep enforcing its illegal sanctions [against Iran], while at the same time laying claim to seeking a return to the JCPOA”, Amir Abdollahian said.

Iran has been given many words and promises alleging that the West intended to revisit its JCPOA approach, the Iranian top diplomat said. There, however, have been no actions, he added.

“Unfortunately, the UK has been part of this inaction too, and this approach should change,” Amir Abdollahian said.

“This is the obvious inconsistency that is being witnessed by the Iranian nation,” he said, adding, “For the current Iranian Administration, measurable actions on the part of the other parties in the JCPOA form the only yardstick.”

Separately, the Iranian official urged that the UK take action towards repaying its debt towards Iran.

Concerning the JCPOA, she claimed that the main focus currently rested on resumption of the talks.