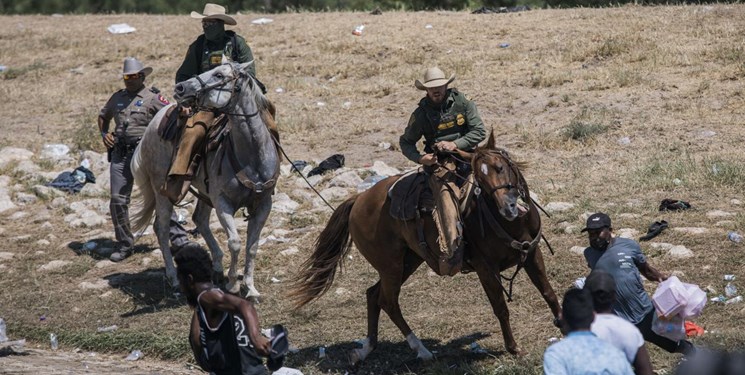 TEHRAN (FNA)- Former President Donald Trump heaped praise on Border Patrol agents on horseback who charged a group of Haitian migrants at the US border with Mexico.

The former president claimed that the agents were doing “one hell of a job” after footage emerged showing riders swinging long reins towards migrants on the ground and grabbing hold of others in Del Rio, Texas, The Independent reported.

Alejandro Mayorkas, the secretary of homeland security, on Friday said he was “horrified” by the photographs and said the incident would be investigated at “the highest levels”.

President Joe Biden said the agents’ behaviour was “outrageous” and that they will face consequences.

Addressing supporters at a rally in the town of Perry in Georgia, Trump referenced the incident and suggested an investigation into the riders’ behaviour was unfair.

During his speech, Trump made the baseless claim that migrants had “overrun our borders in recent days while laughing in the faces of our border patrol agents”.

Referencing the Biden administration’s investigation into the agents’ behaviour, he continued, “They’re going after the riders of the horses rather than the people that came in illegally… isn’t that incredible?"

“They’ve just put them under watch and they’re in big trouble. Most people would say they’re doing one hell of a job,” he said.

Trump added, “This would never be happening if I were the president.”

Elsewhere in his speech, Trump claimed that the recent increase in migrants at the border represented an “invasion” - prompting “build the wall” chants from the crowd.

Trump said that Biden “could finish that wall in one month” if he wanted.

Thousands of Haitian migrants have converged at the Del Rio Port of Entry in recent weeks. A makeshift camp set up at the border crossing was cleared on Saturday, US Customs and Border Protection said.

A large number of migrants trying to enter the country are being removed under Title 42 - a policy that began under the Trump administration. It allows the US to expel migrants without allowing them to apply for asylum if they pose a public health risk.

Many migrants face expulsion because they are not covered by protections recently extended by the Biden administration to the more than 100,000 Haitian migrants already in the US. A devastating 2010 earthquake forced many from their homeland.

The US government expelled 2,324 Haitians on 21 flights to Haiti from Sunday through Friday, according to the Department of Homeland Security (DHS).

Meanwhile, the DHS last week confirmed it would suspend the use of horse patrols in response to the incident in Del Rio.

US Customs and Border Protection’s Office of Professional Responsibility is leading an investigation into the incident, which is expected to conclude this coming week.