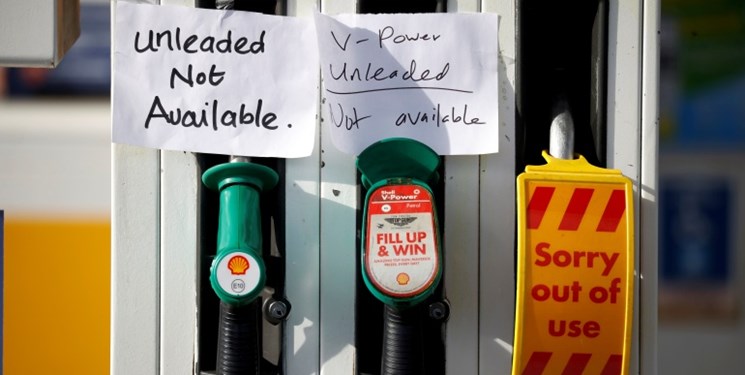 Queues of cars snaked back from filling stations across the country on Sunday, swallowing up supplies and forcing many retailers to shut despite assurances from the government that the United Kingdom is not short of fuel.

The PRA represents independent fuel retailers, who account for 65 percent of all UK forecourts.

“So you can see it is quite acute,” Madderson said, adding, “Monday morning is going to start pretty dry.”

Al-Jazeera’s Andrew Simmons, reporting from outside a petrol station in the capital, London, said people were attempting to stockpile fuel using jerry cans.

“The government has found itself in a big mess over this,” he said, adding, “It has gotten out of control.”

British oil giant BP said nearly a third of its stations nationwide had run out of the two main grades of fuel – unleaded petrol and diesel – as the spate of panic buying forced the government to suspend competition laws and allow companies to work together to ease shortages.

“This step will allow government to work constructively with fuel producers, suppliers, hauliers and retailers to ensure that disruption is minimised as far as possible,” the business department said in a statement.

The Conservative government of Prime Minister Boris Johnson has also announced a plan to issue temporary visas for 5,000 foreign truck drivers to soften the crisis in the world’s fifth-largest economy.

Post-Brexit immigration rules mean newly arrived European Union citizens can no longer work visa-free in Britain, as they could have when the UK was a member of the bloc.

The government had resisted offering more visas for months, despite an estimated shortage of about 100,000 hauliers and industry warnings from various sectors that the COVID-19 pandemic and Brexit had combined to worsen the situation.

Business leaders have warned the visa move is a short-term fix and will not solve an acute labour shortage.

The government said in the long-term British workers should be trained to fill driving jobs as it called on transport companies to improve pay and working conditions.

The lack of truck drivers has also hit British factories, restaurants and supermarkets in recent months.

The shortage has harmed supply chains, making it challenging to get goods to market, and driven fears of price rises in the run-up to Christmas.