Iran: UN Should Force Israel to End Aggression on Syria 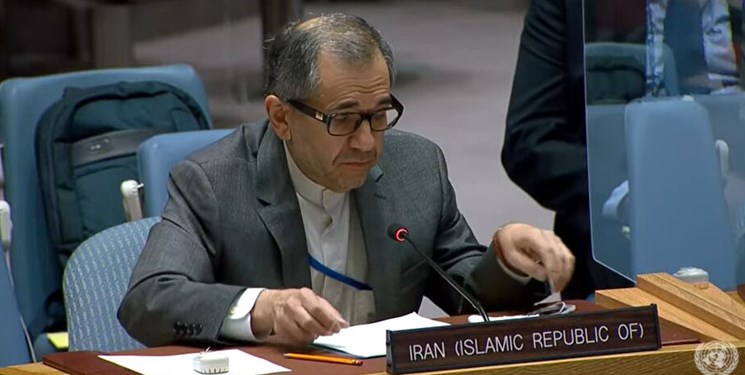 TEHRAN (FNA)- Iran’s Ambassador and Permanent Representative to the United Nations Majid Takht Ravanchi called on the UN Security Council to force the Israeli regime to immediately end its acts of aggression against Syria’s sovereignty and territorial integrity.

Takht Ravanchi made the remarks on Tuesday during a UNSC meeting on the most recent political and security developments in Syria.

“The Security Council must act responsibly and force the Israeli regime to immediately end its violation of the sovereignty and territorial integrity of Syria,” he said.

“Such acts of adventurism, which we strongly condemn, are a blatant breach of international law and a threat to regional and international peace and security," Takht Ravanchi added.

The following is the full text of the Iranian ambassador's speech at the UNSC meeting:

In the Name of God, the Compassionate, the Merciful.

I thank Mr. Geir Pedersen, Special Envoy of the Secretary-General for Syria for his input.

Thanks to his efforts and cooperation of the Syrian Government, the next meeting of the Constitutional Committee is expected to take place soon. This is an encouraging development.

We reiterate our support for efforts of the Special Envoy and the constructive engagement of the Syrian Government in facilitating the work of the Committee.

We encourage the Committee’s Co-Chairs to engage constructively and work in a spirit of flexibility and compromise.

The Committee must continue its work without any external interference or pressure. Setting any artificial deadline for its conclusion or any other conditions or requirements of such nature will negatively impact the Committee’s work.

It must be ensured that it is a truly Syrian-led, Syrian-owned, UN-facilitated political process.

Concurrent with the Committee’s work, serious efforts must also be made in other areas.

Equally important, the Security Council must live up to its responsibility and compel the Israeli regime to put an immediate end to its acts of aggression against sovereignty and territorial integrity of Syria. Such adventuristic practices, which we condemn in the strongest terms, constitute flagrant violations of international law, threatening regional and international peace and security.

Additionally, fighting all terrorist groups must continue unabated as their presence and criminal activities threaten security and territorial integrity of Syria as well as peace and security in the region.

We reject separatist activities or illegitimate self-rule initiatives in Syria and condemn any efforts to support them. The sovereignty, unity and territorial integrity of Syria must be fully respected by all.

Likewise, Syria’s reconstruction and the return of refugees and displaced persons must go hand in hand with the political process. They are interlinked, mutually inclusive and mutually reinforcing.

This requires depoliticizing humanitarian aids and the return of refugees and displaced persons, as their politicization only prolong both the crisis and woes of the Syrian people, who have already been suffering seriously from over 10 years of conflict.

In this context, we recall resolution 2585 through which the Security Council has called upon all Member States “to respond with practical steps to address the urgent needs of the Syrian people”.

A reference to “practical steps” in this resolution is meant, inter alia, to call for the removal of unilateral sanctions. As resolution 2585 is the result of a compromise, including by main countries imposing such sanctions, we urge them to honor their promises, take their obligations under that resolution seriously, and remove, immediately and fully, all unlawful sanctions against Syria which are among major causes of the current humanitarian situation in that country.

We reiterate our principled position that the Syrian crisis must be settled peacefully and in accordance with principles of international law, particularly respect for the sovereignty and territorial integrity of States, non-intervention and non-interference in their internal or external affairs and peaceful settlement of international disputes.

Finally, I reiterate the support of the Islamic Republic of Iran to the people and Government of Syria to restore the unity and territorial integrity of their country.

I thank you, Madam President.