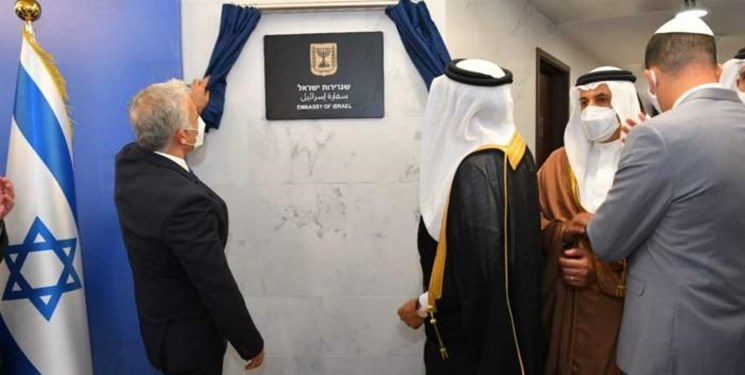 TEHRAN (FNA)- More than 240 Bahraini scholars strongly denounced the first visit by Israel’s foreign minister to the Persian Gulf state since the two regimes established ties last year and expressed their solidarity with the Palestinians.

“We denounce the presence of the foreign minister of the Zionist enemy in Bahrain, and renew our rejection of all forms of normalization with the usurping regime [of Israel], including the opening of an embassy and a trade office in Manama,” the scholars said in a joint statement published on Friday, presstv reported.

“We also reiterate our firm support for the Palestinian nation and every iota of the blessed Palestinian lands, which has been drenched in the blood of martyrs through years of resistance and steadfastness. The murderous invaders are now spilling the blood of Palestinians in Al-Quds and Jenin,” they added.

On Friday, a group of young Palestinian men converged outside the diplomatic mission and raised national Palestinian flags to condemn the Al Khalifah regime’s decision to normalize relations with Israel, and voiced their support for the Palestinian people.

Dozens of people took to the streets in Samaheej village on the Nnorthern coast of Muharraq Island, waving Palestinian and Bahraini flags.

Protesters staged similar rallies in the villages of Abu Saiba and Shakhura, where they carried banners in denunciation of the visit.

The participants were chanting slogans against the inauguration of Israel’s embassy in Manama, when regime forces fired shots and tear gas canisters to disperse them.

“It is just a very sad situation. I don’t see how this can contribute to any kind of the remotely peaceful settlement of the situation. It is just adding more fuel to the fire. There is going to be more protests and uprising in Bahrain followed by cruel suppression, and Israel is just waiting to start a war and leave the whole region in shambles,” Walberg told Press TV.

Separately, the Boycott, Divestment, Sanctions (BDS) movement called upon governments, companies, and artists to withdraw from Expo Dubai 2020, and demanded pressure on the United Arab Emirates to end its support for the apartheid Israeli regime.

The movement demanded that the Palestinian Authority clarify whether it is participating in the expo or not.

It also stressed that any Palestinian or Arab participation in Expo Dubai 2020, where the Israeli regime has a pavilion, would amount to encouraging more normalization agreements between reactionary Arab regimes and the Israeli regime.

Palestinians, who seek an independent state in the occupied West Bank and Gaza Strip with East Al-Quds as its capital, view the deals as a betrayal of their cause.