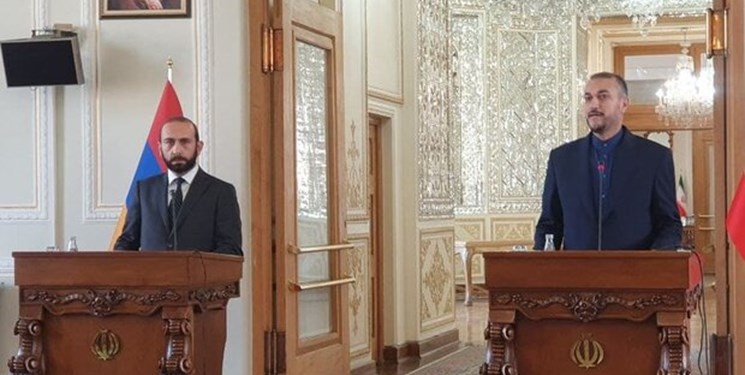 Amir Abdollahian made the remarks in a joint press conference with his Armenian counterpart Ararat Mirzoyan in Tehran on Monday.

"We will not allow some foreign states to affect Iran's relations with its neighbors, including Armenia. Our region will by no means tolerate new excessive demands. The problems of the region must be resolved by the people of the region without any foreign intervention," Amir Abdollahian said.

"Today we agreed to develop cooperation in all areas of economy, trade and tourism. Trade and operating the Armenian transit route are among the issues of mutual concern to both countries," he added.

Amir Abdollahian and Mirzoyan in a meeting in Tehran on Monday underlined the need to broaden mutual cooperation in different fields.

During the meeting in the Iranian capital today, the Iranian and Armenian foreign ministers explored avenues for bolstering and reinvigorating bilateral relations in various areas.

Mirzoyan who arrived in Tehran on Monday morning. The Iranian and Armenian foreign ministers are scheduled to attend a joint news conference after the meeting.

The Armenian Foreign Ministry spokesperson in a tweet on Monday announced the meeting between Iranian and Armenian foreign ministers.

The two foreign ministers also met in New York on the sidelines of the UN General Assembly last week.