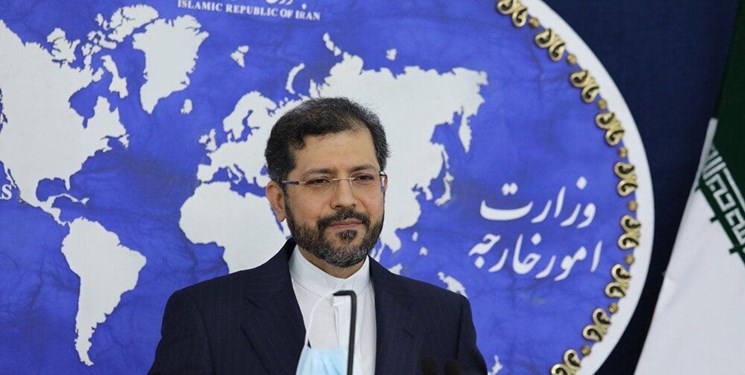 TEHRAN (FNA)- Foreign Ministry Spokesman Saeed Khatibzadeh in a Twitter message underlined that any future Vienna talks should guarantee the rights of the Iranian people and ensure that the US would stick to the nuclear deal and not abandon it like the past.

"Our sole aim is to ensure talks will secure our rights, including sufficient guarantees that the US will actually stick to the deal this time," Khatibzadeh tweeted.

In relevant remarks in late September, Khatibzadeh blasted the US for its dishonesty in the nuclear deal talks, and said that Tehran will merely take part in result-oriented talks in a bid to revive the Joint Comprehensive Plan of Action (JCPOA).

“Only Iran speaks for Iran. Our mandate is to engage in only RESULTS-oriented dialogue,” Saeed Khatibzadeh tweeted.

He underlined that talks for sake of talks is non-starter, and said, "So is fallacy that #EconomicTerrorism works."

"High time for the party that unilaterally left JCPOA—to wake up to NEW reality," he added.

In a relevant development in late September, Iranian Foreign Minister Hossein Amir Abdollahian in a meeting with his French counterpart Jean-Yves Le Drian in New York cast doubt about seriousness of US President Joe Biden administration's decision to return to the JCPOA.

During the meeting on the sidelines of the UN General Assembly (UNGA) meeting in New York, Amir Abdollahian said that Iran's new administration is "pragmatic" and considers negotiations as an important tool of diplomacy.

The two sides also discussed bilateral issue and the latest situation in Afghanistan.

Describing that France is vehemently interested in expanding its relations with Iran, Le Drian, for his part, said that that recent phone talk between Iranian President Seyed Ebrahim Rayeesi and his French counterpart Emmanuel Macron show the importance that the two sides attach to bilateral relations.

Le Drian agreed with the principled position of Iran on the need to form an inclusive government and prevent the spread of terrorist acts in Afghanistan and stressed the need to help refugees in Afghanistan's neighboring countries.

In a relevant development in mid-September, Amir Abdollahian in a meeting with his Swiss counterpart Ignazio Cassis criticized Washington for its dishonesty in the nuclear deal talks, and called on the US to change its approach.

During the meeting held on the sidelines of the UN General Assembly, Amir Abdollahian referred to the stable and good ties between the two countries, saying, "We want to expand bilateral relations more than before and see the vast presence of Swiss firms in Iran's economic and development projects. There are many grounds for developing relations between the two countries."