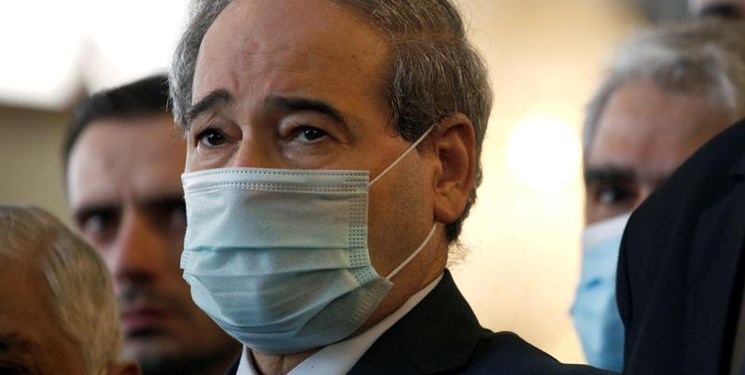 TEHRAN (FNA)- Syrian Foreign Minister Faisal Mikdad said his country does not disagree with Russia over the priorities in the fight against terrorism, while demanding that Turkey and the United States immediately end their illegal occupation of the Arab country.

“We do not disagree at all with our allies in the Russian Federation on the priorities that we both have to know in the face of terrorism,” Mikdad stated in an interview with Syria’s Al-Watan daily published on Sunday.

He described Syrian President Bashar Al-Assad’s recent visit to Russia as one of his best visits, noting Moscow provides unlimited support to Syria in the fight against terrorism.

“We trust our friends for several reasons,” he said, adding, “First, because they adhere to the Charter of the United Nations, international measures, and multipolarity in international politics, and second, because they believe in serious action against terrorism.”

Mikdad also stressed that it is time for Turkey to withdraw its forces from the Northwest of Syria and to back a solution that guarantees normal relations between Syria and Turkey after the end of Ankara’s occupation of the Syrian soil.

The Syrian minister also urged the United States to withdraw its forces from Syria.

“We have many ways to convince the Americans to leave our country, so I suggest they leave without casualties,” he stressed.

The United States and Turkey, among several other countries, have been involved militarily in the conflict in Syria, which began in early 2011. Turkey has sent troops to Northern regions of the Arab country and provided the so-called Free Syrian Army (FSA) militant group with military assistance throughout the turmoil.

Damascus has on several occasions accused Washington and Ankara of supporting terrorist groups such as Daesh and Jabhat Al-Nusra, while demanding their immediate withdrawal.

On Sunday, Assad stressed the need to end the presence of “illegal foreign powers” on Syrian soil, making a reference to the US and Turkish forces.

During a meeting with visiting Iranian Foreign Minister Hossein Amir-Abdollahian, Assad said the war on terror will continue until the entirety of the Syrian soil is liberated.

However, he continued, those countries cannot guarantee their future by relying on Western countries and their assurances.

Hinting at the Syrian delegation’s meetings on the sidelines of the latest UN General Assembly summit, the Syrian foreign minister noted that the Arab-Arab talks between Syria and other Arab countries have not been paused.

Mikdad further stressed that Damascus is willing to let bygones be bygones and turn over a new leaf in order to mend its ties with other Arab countries.