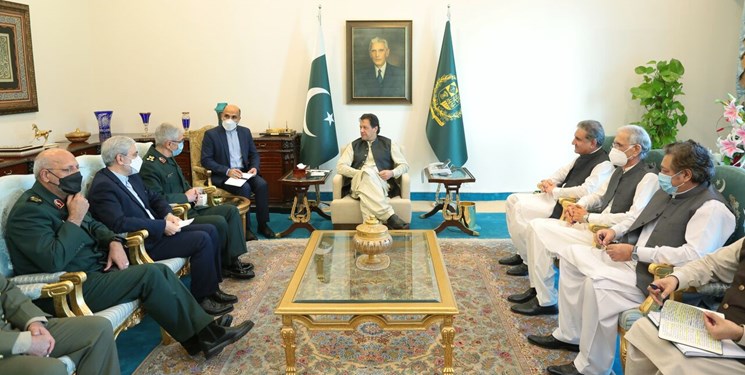 General Baqeri, who is in Pakistan on an official visit, held talks with Imran Khan on Wednesday to discuss a host of issues, including bilateral relations.

During the meeting, Imran Khan pointed to his last month’s meeting with Iranian President Ebrahim Rayeesi on the sidelines of the Shanghai Cooperation Organization in the Tajik capital of Dushanbe, and reaffirmed Islamabad’s commitment to further bolster ties with Tehran, in border, economic, military and security issues.

The top Iranian General, for his part, described as significant his meetings earlier in the day with Pakistani Chief of the Army Staff of Pakistan Army General Qamar Javed Bajwa.

General Baqeri said that Tehran and Islamabad needed to shore up their close cooperation, adding that the two neighbors have witnessed significant progress in relations over the past years.

The two sides also conferred on major regional developments, including in Afghanistan.

The Pakistani premier stressed that there is no military solution to Afghanistan’s problems, calling for the formation of an inclusive government comprising of all Afghan groups.

General Baqeri had also earlier exchanged views with General Bajwa on a range of issues such as defense ties between the two neighboring countries.

The two generals met in the Pakistani city of Rawalpindi on Wednesday.

During the meeting, they expressed confidence in the growing trend of military, security and border interactions between Iran and Pakistan in recent years and vowed to advance their contacts.

They also reviewed the latest developments in bilateral relations, defense ties and regional developments, including Afghanistan.

Also on Wednesday, General Baqeri and Chairman of Pakistan’s Joint Chiefs of Staff Committee General Nadeem Raza have discussed regional developments, the situation in Afghanistan, strengthening of defense relations between the two countries and border cooperation.

The meeting was held in the garrison city of Rawalpindi.

General Baqeri and General Nadeem Raza discussed a wide range of bilateral relations between Iran and Pakistan in the field of defense, security, military, border, regional developments, including the situation in Afghanistan.

The two sides stressed the serious desire and determination to strengthen these relations and expand bilateral cooperation between the armed forces of Iran and Pakistan.

Heading a high-ranking military-security delegation, the top Iranian general arrived in Pakistan on Tuesday at the invitation of the Pakistan army chief for a three-day trip. It is General Baqeri’s second official visit to Pakistan over the past three years.