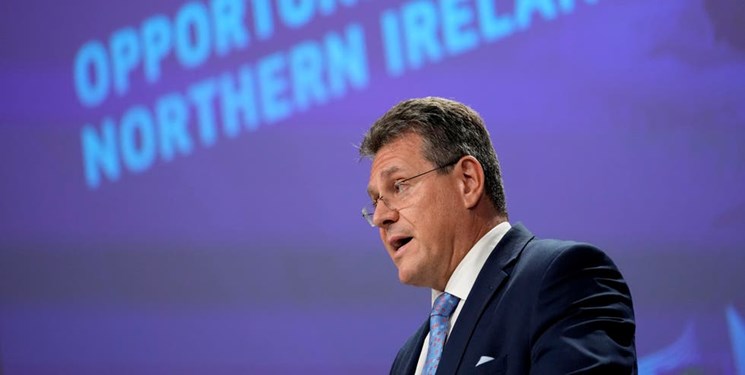 TEHRAN (FNA)- Brussels was “preparing for the worst” over Brexit on Wednesday after the UK signaled the EU’s offer to scrap up to 80 percent of checks on goods entering Northern Ireland was not enough to resolve the bitter dispute over the Irish border.

But the UK said that, while Lord Frost would look “seriously and constructively” at the EU package, talks over the coming weeks must also take in his demand for the removal of European Court of Justice (ECJ) jurisdiction over the deal.

A British source told The Independent, “Without new arrangements on governance the protocol will never have the support it needs to survive. It is a fundamental issue which needs to be addressed if the protocol is to be put onto a sustainable footing.”

The scene was set for a Christmas showdown, with observers unsure whether Sefcovic’s initiative had provided enough “wriggle room” for Frost and Prime Minister Boris Johnson to back down from their hardline stance.

Meanwhile, UK businesses urged Johnson to pull back from the brink, warning that his threat to tear up the protocol could trigger punitive tariffs on British products – including 10 percent on car exports to the EU.

Brussels has made clear that it is ready to respond with tariffs if the UK takes the nuclear option of invoking Article 16 of the protocol to suspend implementation of the deal negotiated and agreed by the PM and his chief Brexit adviser in 2019.

But the EU appeared ready to move further to avoid the collapse of the agreement, with sources describing the vice-president’s proposals as an opening offer which “lays the ground” for talks.

In an eagerly-anticipated press conference at the European Commission HQ, Sefcovic set out what he described as “a robust package of creative and practical solutions” to the bureaucracy and shortages that have bedevilled Northern Ireland since the full implementation of Brexit at the start of 2021.

As well as slashing overall red tape, he stated the EU was ready to ditch new regulations on medicines being moved from the mainland as well as a ban on chilled meat products like sausages destined for the Northern Irish market. Containers of food products will only require one vet’s certificate, rather than 100 or more to cover every different product in the consignment.

In return, the UK must build new border control posts and provide the EU with access to real-time trade data to help prevent smuggling.

Dismissing Lord Frost’s concerns over the ECJ, Sefcovic noted the issue had been raised only once with him in comprehensive talks with businesses and political parties in Northern Ireland. He added that with a positive response from Britain, the row could be resolved by the New Year.

But raising the prospect that UK intransigence could lead to a hard border with the Republic, he said it was “very clear” that the province cannot continue to enjoy access to the single market without the supervision of the ECJ.

In a speech in Lisbon on Tuesday, Lord Frost called for the wholesale replacement of the protocol, warning that enforcement powers for the Luxembourg judges meant EU law being imposed on Northern Irish citizens without democratic consent.

“That, I think, has to change if we’re to find governance arrangements that people can live with,” he added.

EU sources stressed that Sefcovic’s “package of enhanced opportunities” came not in response to the Lisbon speech, but was aimed at “solving practical problems” affecting people and businesses on both sides of the Irish border, while preserving the peace and stability provided by the Good Friday Agreement.

But he took a swipe at the UK’s failure so far to deliver on data-sharing and checks on imports promised in the 2019 agreement, saying, “We are showing flexibility, but the remaining controls must be done properly.”

A UK government spokesperson stated London would look at the package “seriously and constructively” and was ready to “work hard” on talks.

The CBI urged both sides to “grasp this opportunity to get back round the table and agree sustainable long-term solutions”.

And the British Chambers of Commerce warned the government not to allow its concerns over the ECJ to get in the way of a deal.

“Both sides need to reach a balanced agreement soon, focusing on cutting checks for businesses under the protocol and not disputes about different legal systems which have not been raised by the business community,” stated BCC trade policy chief William Bain.

DUP leader Sir Jeffrey Donaldson added the EU’s proposals amounted to a “welcome acknowledgement that the NI protocol has not worked and does not have the consent of the unionist community in Northern Ireland”.

But he warned that the package falls “a long way short of being the basis of a sustainable solution”, as it envisaged the survival of “a protocol that has failed”.

Ireland’s Foreign Minister Simon Coveney welcomed Lord Frost’s promise to “engage fully” with the proposals, noting they offered a “pathway” out of the crisis.

Labour’s shadow Northern Ireland secretary Louise Haigh also added, “It is clear that with political will there is a landing ground – now is the time for the EU, UK and representatives from Northern Ireland to get around the table and reach the agreement communities need."

But the former top civil servant at the Department for Exiting the EU, Philip Rycroft, said he was “puzzled” by London’s fixation on the ECJ issue, which the UK had known was an EU red line from the start.

“Seeking to overturn that does beg a question about what the UK thought it was signing up to?” he told Times Radio, adding, “And indeed its resolve to stick with the protocol for the long term.”