Official: Iran Not to Tolerate Presence of Terrorists in Region 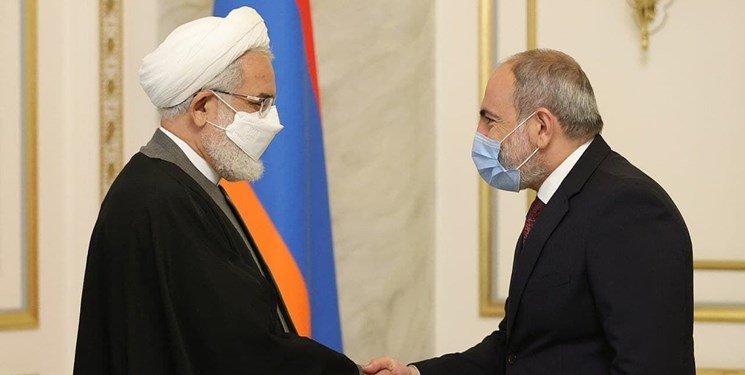 TEHRAN (FNA)- Iran’s Prosecutor-General Mohammad Jafar Montazeri in a meeting with Armenian Prime Minister Nikol Pashiniyan reiterated his country’s serious campaign against the presence of terrorists in the region.

Iran is strongly opposed to provocative acts and deployment of terrorists in the region, Montazeri said in the meeting in Yerevan on Wednesday.

Pashiniyan, for his part, said that Armenia is ready to boost judicial relations with Iran to the highest levels.

He added that the visit to Yerevan by the Iranian prosecutor-general provides a chance for the expansion of such relations between the two neighboring countries.

Referring to a recent meeting he had with President Rayeesi on the sidelines of a Shanghai Cooperation Organization Summit in Dushanbe, Pashiniyan stressed the need for implementing the already reached agreements between the two sides.

Pashiniyan and Montazeri also discussed the latest developments in the region.

Iranian officials have underscored seriousness in confronting the terrorist groups in the region and inside Iran.

In a relevant development in mid september, Iranian security forces identified and disbanded a terrorist cell affiliated to the foreign spy agencies, the intelligence ministry announced in a statement on Wednesday.

The security and intelligence forces dismantled the terrorist team in an operation while it was attempting to carry out acts of sabotage and terrorist attacks against Iran’s vital and sensitive centers, the statement said.

Also, in July, the Iranian security forces had also dismantled a terrorist group affiliated to the Israeli spy agency, Mossad, and captured its members.