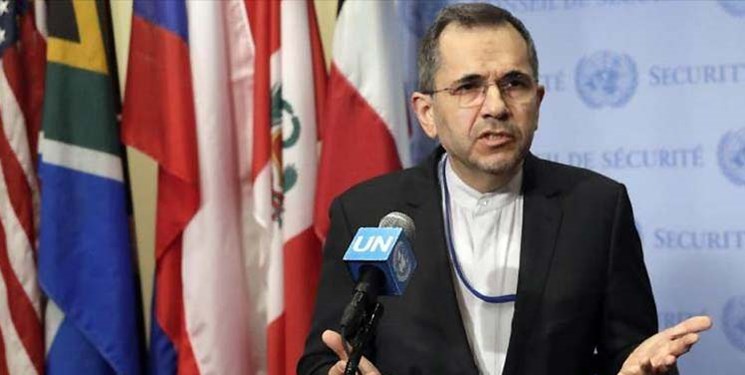 TEHRAN (FNA)- Iranian Ambassador and Permanent Representative to the United Nations Majid Takht Ravanchi in a letter to the UN Security Council warned of Israel’s growing threats against Iran, reiterating that the threats should be condemned as a violation of international laws.

Takht Ravanchi in a letter submitted to the current president of the Security Council on Wednesday cautioned of a sharp increase in Israeli threats against the country, warning against any “miscalculation” or “military adventurism” on the part of the regime against the Islamic Republic, including its nuclear program.

Iran’s Representative to the UN General Assembly First Committee Heidar Ali Balouji had also said at a Wednesday session on “Nuclear Weapons, Other WMDs, Outer Space, and Conventional Weapons” that the Israeli regime is the main hurdle to a Middle East free of nuclear weapons.

“We reiterate our call on the international community to compel Israel to dismantle its nuclear arsenal, promptly accede to the NPT as a non-nuclear-weapon party without any preconditions and place all of its nuclear facilities under the IAEA’s full-scope safeguards,” he said.

He described the Islamic Republic as one of the countries “with the highest record in accession to the international instruments banning” weapons of mass destruction (WMDs).

“Achieving global nuclear disarmament remains one of the most long-lasting goals of the United Nations. Today, international security is under threat by the existence of almost 14,000 nuclear weapons with well-funded, long-term plans to not only modernize but also strengthen the arsenals of NWSs (nuclear weapons states) and so nuclear arms race,” he said.

He said the US withdrawal from the Intermediate-Range Nuclear Forces Treaty and its unwillingness to return to the Joint Comprehensive Plan of Action — the 2015 nuclear agreement signed between Iran and major world powers — have inflicted immense damage on international disarmament measures.

The diplomat said chemical weapons remain a grave concern, with the US as the only possessor, urging Washington to meet a 2012 deadline for the destruction of its stockpile of such weapons.

Balouji said the ratification of a legally binding protocol would be the most effective way to strengthen the Biological Weapons Convention, urging the United States to withdraw its objection to the adoption of such a measure.

Similarly, a legally binding instrument is required to prevent an arms race in outer space, he said, saying the US already has a space force with a $17 billion budget, which will increase by 13 percent, he noted.

Iran believes that the arms race in space should be stopped through a binding legal document, he emphasized.

The Iranian diplomat defended countries’ right to possess conventional weapons, warning that massive and irresponsible production and transfer of such weapons in the Middle East pose a threat to the entire region.

“Israel is the largest recipients of US arms aids in the region. Using these weapons, it is committing different crimes and causing destabilization and insecurity that must be stopped,” Balouji said.