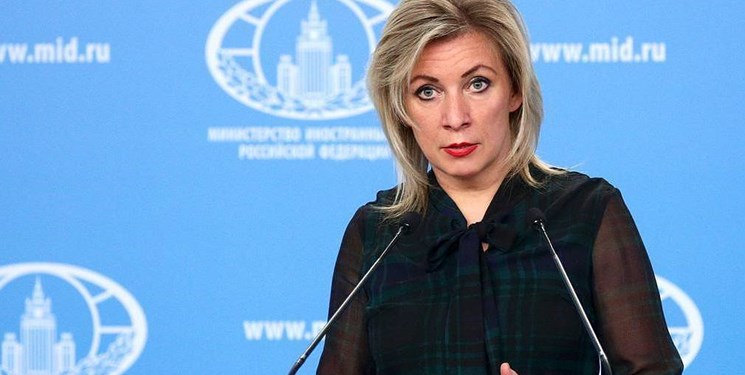 TEHRAN (FNA)- The European Union’s decision to extend the list of Russian nationals, under sanctions for allegedly posing a threat to the territorial integrity of Ukraine, is an example of the European Union’s hypocrisy, Russian Foreign Ministry Spokeswoman Maria Zakharova said on Thursday.

The diplomat stressed that any "sanctions decisions", which were made bypassing the UN Security Council, are illegitimate from the international legal stance, TASS reported.

"On the whole, this is how they must be treated," she stated speaking at a news conference, adding, "There is certainly a political overtone. These are sanctions games, these are the real sanctions games of the European Union."

"It is deeply regrettable because they are completely politically motivated, have nothing to do with the law and contradict the law," Zakharova noted.

"They were approved on the eve of the Ukraine-EU summit, which took place on October 12, while the [sanctions] decisions were made on October 11. It was also a signal for Kiev, which supports sabotaging the Minsk Accords," she continued.

"When our EU partners, as I have said before, call on us to implement the Minsk Accords in full and at the same time give Kiev a corresponding signal in the form of such decisions, which, according to them, must somehow restrain Russia and somehow reprove it, we can call it only as games and hypocrisy," she added.

"We will certainly respond to such an unfriendly step on behalf of the European Union," the diplomat noted.

On October 11, the European Union expanded its blacklist over Crimea’s reunification with Russia, adding eight individuals, including the head of the Federal Security Service (FSB) in Crimea and Sevastopol, Leonid Mikhailiuk.

Several judges, prosecutors and security officers "responsible for enforcing Russian law" in Crimea that Brussels refuses to recognize as part of Russia, were added to the list, according to a report in the Official Journal of the European Union on October 11.

Apart from Mikhailiuk, the list includes Vladimir Terentiev, Head of the Main Investigation Department of the Investigative Committee of Russia for the Republic of Crimea and the city of Sevastopol, Crimean judges Viktor Mozheliansky, Galina Redko, Mikhail Belousov and Andrey Dolgopolov, investigator Magomed Magomedov and prosecutor Yevgeny Kolpikov.

Thus, according to the document, there are 185 individuals on the black list. Restrictive measures include, in particular, travel bans and asset freezes.

This block of individual sanctions is part of the three packages of sanctions that the EU imposed against Russia in 2014, along with sectoral economic sanctions that were prolonged in July until January 31, 2022, and sanctions against citizens and companies of Crimea that will remain in effect until late June, being extended once a year.

As the condition for lifting individual and economic sanctions, the EU cites full compliance with the Minsk agreements, ignoring the fact that Ukraine fully sabotages them. The EU is not planning to abolish sanctions over Crimea as long as the peninsula remains part of Russia.