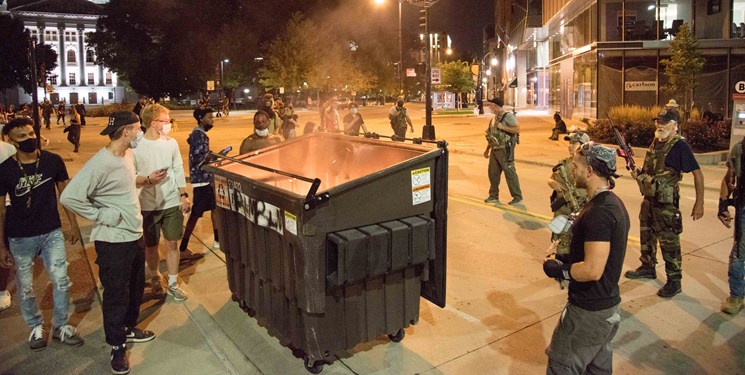 TEHRAN (FNA)- The police department in the Wisconsin city of Kenosha is facing new legal action after being accused of “deputizing” a group of militia vigilantes during anti-police brutality protests last year in which 17-year-old Kyle Rittenhouse killed two people.

The action, brought by Gaige Grosskreutz, who was wounded during the incident, alleges that local police effectively deputized a “band of white nationalist vigilantes” during protests sparked by the shooting of Jacob Blake, who is now paralyzed from the waist down, by a white police officer, The Guardian reported.

According to the complaint, which names the city, county, Kenosha Police Chief Eric Larsen, County Sheriff David Beth and former Kenosha Police Chief Daniel Miskinis, as defendants, a law enforcement officer offered Rittenhouse “words of encouragement, appreciation, and thanks” for his support.

“We appreciate you guys – we really do,” the unnamed officer is alleged to have said to Rittenhouse, who faces trial on homicide charges in the deaths of Joseph Rosenbaum, 36, and Anthony Huber, 26, and an attempted homicide charge for shooting Grosskreutz, who lost part of his bicep. The trial is set to begin on November 1.

Rittenhouse has pleaded not guilty to the charges. He is expected to argue that he acted in self-defense on the night of August 25, 2020.

Grosskreutz’s suit against the Kenosha police follows a legal action brought by the family of Huber in August which claims the city of Kenosha and its police and county sheriff’s departments conspired with white militia members, giving them “license … to wreak havoc and inflict injury”.

Separately, the US department of justice recently ruled that Rusten Sheskey, the officer who shot Blake seven times in the back, will not face federal criminal civil rights charges after concluding that there was insufficient evidence to prove that Sheskey willfully used excessive force.

The Grosskreutz complaint contrasts police treatment of racial justice protesters, which included rubber bullets and tear gas, with its response to counter-protesters, including Rittenhouse, who were in some cases armed.

Cellphone video captured the incident as Huber and Grosskreutz pursued Rittenhouse after Rosenbaum was shot. After Rittenhouse trips, he is seen to fire at Huber and then shoots Grosskreutz with an AR-style semiautomatic rifle.