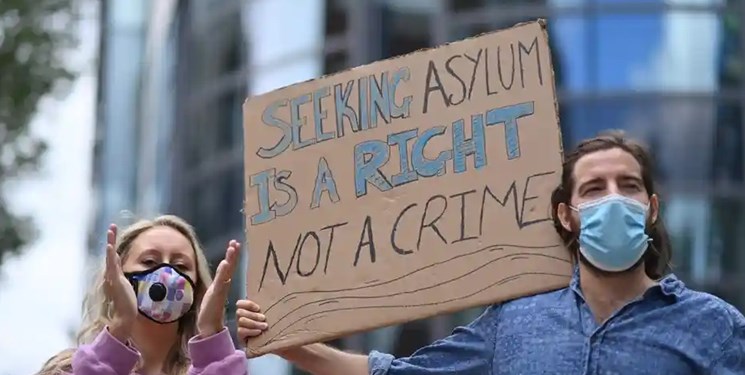 TEHRAN (FNA)- More than 4,500 people have been held in immigration detention in the UK before being released into the community and only then identified as potential victims of trafficking, official figures for the past five years showed.

Charities claim the figures demonstrate a “detain first, ask later” attitude that runs counter to the fight against modern slavery and suggest others are probably being deported without having been referred for support, The Guardian reported.

They fear the situation will be exacerbated by the nationality and borders bill, which they say makes it harder to identify victims.

Maya Esslemont, the director of the charity After Exploitation, which obtained the data, released to coincide with anti-slavery week, said, “It is terrifying that, as hard evidence shows just how often survivors are punished rather than supported, the government would put considerable resource behind making the trafficking decision-making process even stricter."

“In thousands of instances, we have seen some of the most vulnerable people in the UK face conditions which have not been conducive to disclosure of their abuse. Aside from the moral imperative to make trafficking support more readily available to those who need it, it is clear that the government’s ‘detain first, ask later’ approach to immigration detention is completely obscuring the state’s ability to identify human trafficking, and is running counter to its goal of fighting modern slavery,” Esslemont added.

The figures, obtained through a freedom of information request, show that between 2016 and 2020 4,565 people were identified as potential trafficking victims under the national referral mechanism (NRM) after leaving immigration detention, usually intended for people who are to be removed from the UK. The number for the first three months of this year was 68.

Emma Harris, an immigration and asylum barrister at Goldsmith Chambers, said, “This is a strong indication that there are likely to be victims of trafficking who have been removed or deported from the UK without ever being referred to the NRM for the recognition and support that they were entitled to.”

In 2020, nine of 10 final decisions of the NRM found the person referred had a victim of trafficking and/or modern slavery, Harris added.

Home Office detention gatekeepers, who assess suitability for detention, have a legal duty to identify suspected trafficking victims and give survivors the opportunity to opt into the NRM. Without a referral, survivors are unable to access support such as housing, counselling and legal support.

The Home Office has previously acknowledged that an effect of the nationality and borders bill may be that some individuals are “more likely to be detained, or have their detention continued, than would currently be the case”.

After Exploitation and other charities are calling on the government to scrap the plans.

A Home Office spokesperson said, “Decisions to detain are made on a case by case basis and vulnerable people will only be detained in very specific circumstances, such as for the protection of the public. Staff in immigration removal centres undertake training on the NRM and as a result potential victims of modern slavery are regularly identified in detention."

They said the plans would “ensure that asylum, human rights claims, and any other protection matters are considered at the earliest opportunity”.