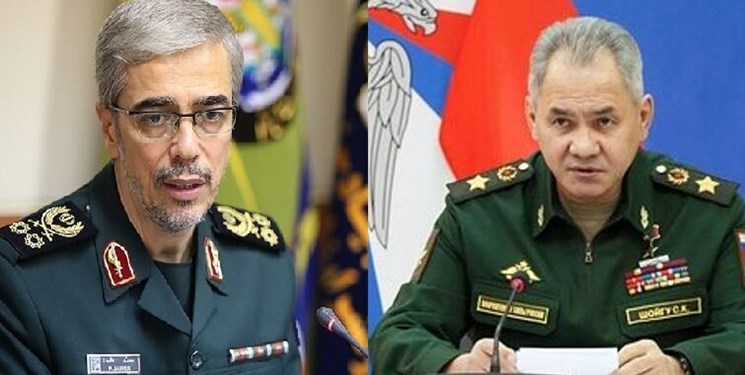 During the meeting in the Russian capital on Tuesday, the top Iranian and Russian generals explored avenues for bolstering and reinvigorating mutual cooperation in the defense field.

During the meeting, the two sides discusse the military agreement that is going to be signed soon.

In a relevant development on Monday, General Baqeri announced that Iran-Russia Joint Military Commission will convene in three months from now.

General Baqeri made the remarks in a joint press conference after meeting with his Russian counterpart, General Valery Gerasimov.

"In the meeting of the Iran-Russia Joint Commission, mutual cooperation in defensive, security, and academic fields will be on the agenda and reviewed," he reiterated.

General Baqeri said that in his meeting with General Gerasimov, cooperation between the armed forces of Iran and Russia, and a contract on cooperation in this field were discussed.

In a relevant development on Monday, General Baqeri said that he was following the implementation of contracts for purchasing defense equipment from Russia in his visit to Moscow.

General Baqeri, who visited Moscow to meet with Russia's military officials, made the remarks during a meeting with experts and managers of Iranian institutions at the Iranian Embassy in Moscow.

During the meeting, General Baqeri talked about the status of defense cooperation between the two countries, the latest regional and international developments and the fight against terrorism as objectives of his visit to Moscow.

Referring to the contracts concluded for purchase of fighter jets, training jets and combat helicopters from Russia, General Baqeri reiterated that these contracts were concluded after lifting of arms embargo on Iran

"We will discuss the implementation of these contracts during my visit," he added.

In relevant remarks on Sunday, Baqeri said that the Islamic Republic of Iran is determined to expand military cooperation with Russia in line with the administration of President Seyed Ebrahim Rayeesi's 'Look to the East' policy.

On October 18, 2020, the embargo was lifted under Security Council Resolution 2231, which endorsed the 2015 nuclear agreement, officially known as the Joint Comprehensive Plan of Action (JCPOA).

General Baqeri started a tour of Russia on Sunday.