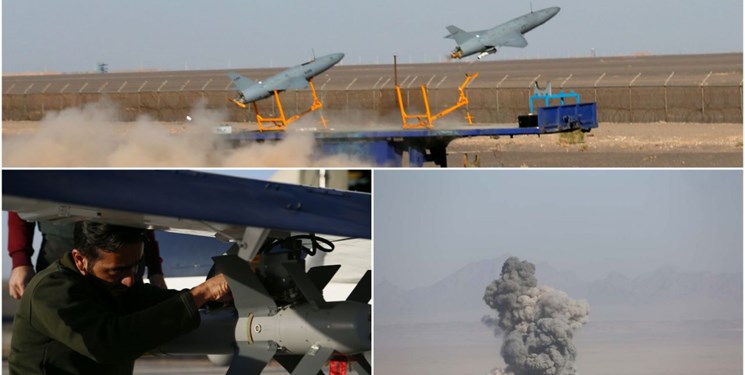 TEHRAN (FNA)- The Iranian Army Air Force kicked off the 10th edition of the drills, codenamed Fada’eeyan-e Harim-e Velayat (Devotees of the Velayat Sanctuary), in several airbases across the country on Thursday, destroying hypothetical enemy targets with home-made ‘Yasin 90’ bombs.

In the main and operational phase of the 10th Fada’eeyan-e Harim-e Velayat military wargames on Thursday, vital targets of hypothetical enemy were destroyed by the indigenized ‘Yasin 90’ bombs.

The drills are participated by all bases of Army Air Force and with a focus on airbases of Shahid Babayee in Isfahan, Shahid Yasini in Bushehr, Shahid Abdolkarimi in Bandar Abbas, Vahdati in Dezful and Shahid Fakouri in Tabriz under the direct command of the Army Air Force Headquarters.

On the first day of the operational phase of the military exercises, F-4 and F-5 bombers equipped with pinpointing, smart and precision-guided missiles and F-7 aircraft equipped with ‘Yasin 90’ bombs and home-made rockets with innovative techniques successfully destroyed the critical and vital targets of hypothetical enemy both on land and sea, Iran’s Army Air Force Commander Brigadier General Hamid Vahedi said on Thursday.

Also, F-5 and MiG-29 fighter jets conducted air operations successfully in real-time combat, in which the missile fired by hypothetical enemy was intercepted and destroyed by air-to-air missiles of Iran’s Army Air Force, he added.

During the military exercises, the Command Center will communicate directly with pilots in fighter jets to carry out their mission, so that targets of fighter jets will be determined from the Command post, General Vahedi said, adding that shooting against air targets with high speed and in various altitudes and air-to-ground bombardment were practiced at the first stage of the drills, using smart, indigenous and upgraded heavy and semi-heavy bombs as well as use of laser missiles, thermal television, radar and various rockets and bombs produced by the young Iranian experts.

The main phase and operational stage of the 10th Air Force drill entitled Fada’eeyan-e Harim-e Velayat started on Thursday with the participation of manned and unmanned aircrafts of Iran’s Army Air Force in the presence of Commander-in-Chief of Army of the Islamic Republic of Iran, Deputy Commander of Armed Forces and a number of senior commanders and officials of Khatam al-Anbia Central Headquarters.

A wide range of aircraft and drones, including dozens of fighter jets, bombers, military transport aircraft, and reconnaissance aircraft, will be employed in the main and operational phase of the one-day drills.

He added that the aerial maneuvers would be backed by Boeing-707 and -747 aerial refueling airplanes, transport and freight aircraft, in addition to homegrown Karrar (Striker), Kian, Ababil (Bird Flock), Arash, and Kaman-12 (Bow-12) unmanned aerial vehicles that are equipped with rockets, precision-guided missiles, long-range smart bombs and radar jamming devices.

General Vahedi said the military hardware have been deployed to five bases across the country, including Shahid Babayee Airbase in the Central Isfahan province and Shahid Fakouri Airbase in the Northwestern province of East Azarbaijan Province, over the past few days.

The maneuvers, he said, are aimed at “assessment of combat capabilities of IRIAF units, increasing preparedness of interceptors, practicing the implementation of reconnaissance and operational plans, and establishment of a right model that would suit real-life battle.”

The commander said that long-range endurance of the Islamic Republic of Iran Air Force fighter jets outside their defensive spheres, pinpoint accuracy of bombs and rockets in air-to-surface strikes as well as surveillance of the operational zone will be put to test during the massive drills.

Moreover, air-to-air missiles will be fired to test their high destructive power.

General Vahedi said all kinds of homegrown and upgraded systems and ammunition, including heavy and semi-heavy smart bombs, plus all kinds of laser-guided, thermal and radar-evading missiles will be used during the exercise.

He emphasized that Fada’eeyan-e Harim-e Velayat-10 aerial drills will be commanded by the IRIAF Command Center in Tehran, using sophisticated, multi-layered and secure communication systems.

Iranian military experts and technicians have in recent years made great progress in developing and manufacturing a broad range of domestically-manufactured equipment, making the armed forces self-sufficient in this regard.

The operational phase of the joint large-scale drill, codenamed Modafe’an-e Aseman-e Velayat 1400 (Defenders of Velayat Skies 1400), was held in the Central desert areas of Iran.

The units of the Iranian Army's Air Defense Force, the IRGC Aerospace Force and the Army’s Air Force were taking part in the exercises.

The drills were aimed at boosting the combat preparedness, strengthening deterrent power, evaluating the homegrown air defense systems in countering various threats, full defense against electronic warfare and cyberattacks, improving knowledge and skill of the units and boosting coordination among the Army and the IRGC’s command and control centers.

The participating units were employing combined, indigenous and creative tactics and techniques which would be implemented in proportion to threats.

The use of modern technology was among leading features of the maneuvers.