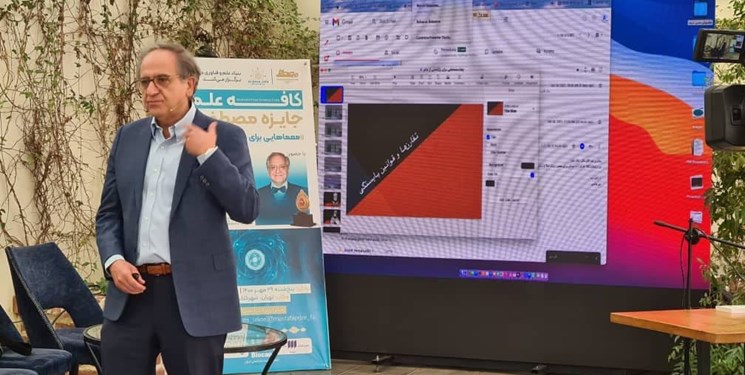 Another lecturer of the event was Hessamedin Arfaei, physicist in the area of String Theory and Professor of Physics at Sharif University of Technology, who has translated Cumrun Vafa’s book Puzzles to Unravel the Universe into Persian.

The event was attended by many students and enthusiasts from different universities.

Vafa started his speech by saying “my interest in science dates back to the days I lived in Iran.”

He said in those days he found out that the basic mathematical puzzles are relevant to understanding the universe and physics in particular.

“I started to bring these puzzles into the format of a class held at Harvard University,” he continued.

He mentioned the efforts of Muslim scientists centuries ago who have done fascinating work in the realm of mathematics and physics.

“The height of the atmosphere was measured by Ibn Muath,” he said.

He then talked about the contributions of other scientists such as Newton, Gauss, Maxwell, and Einstein.

He stated that “the field of my research is String Theory, but I have not started it.”

“String Theory was discovered accidentally,” he continued, adding that “this theory seeks to define physics from the tiniest particles to the biggest scales— the scale of the universe.”

“Mathematics is very important in this field of research,” he added.

He then started to ask some puzzles from the audience. Through these puzzles, he led the discussion towards fundamental notions in mathematics and physics. “I want to show you the power of basic mathematical ideas in the area of physics,” he said.

He talked about ideas such as symmetry breaking, Higgs particle, the power of ‘continuity’, and ‘gravitational lens’.

At the end of his speech, a friendly Q & A session was held with the audience.

Hessamedin Arfaei, physicist in the area of String Theory and Professor of Physics at Sharif University of Technology, began his talk by saying that “I became fascinated with String Theory 50 years ago.”

He talked about Standard model of elementary particles including three generation of matter (fermions) and interactions / force carriers (bosons). He then proceeded to explain standard model interactions

“In String theory, matter is made up of strings,” he said, adding that “the string is too tiny.”

Gravity and general relativity were also discussed during his speech.

He hinted at the concept of ‘Unitarity’ in physics.

“String theory imposes the dimensions of place and time upon us,” he said, adding that according to this theory “the universe is multi-dimensional, made up of 10 dimensions.”

Prior to String Theory, it was believed that the universe is made up of 4 dimensions, he continued.

Arfaei said that String Theory has many wonders, one of which is the concept of ‘duality’.

He then briefly hinted at ‘Brane’ in String Theory. There was a problem about it that that Vafa and his team solved,” he said.

He noted that Vafa and his team have also worked on the idea of ‘the initial singularity’.