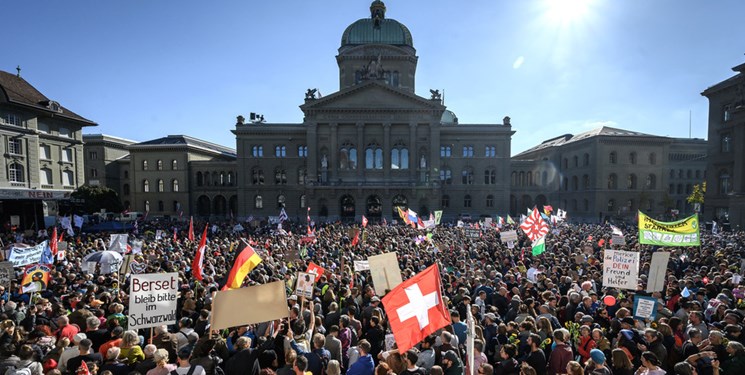 TEHRAN (FNA)- Several thousand people gathered in Bern for the latest rally of opponents of government measures to curb the COVID-19 pandemic.

On Saturday afternoon, protestors filled the square in front of the parliament building chanting “freedom” and ringing bells. According to Keystone-SDA, there were no notable incidents with police, who were patrolling the area, Swiss Info reported.

The city of Bern gave the greenlight for the demonstration under certain conditions. It hopes that by doing so the unauthourised demonstrations that have taken place on Thursdays will stop.

Some of these rallies have led to skirmishes with police including most recently on October 7 when police used water cannons and rubber bullets to disperse some 500 people who were demonstrating against government anti-COVID measures in Bern.

On October 15, Bern security chief said the city was cracking down on unauthourised protests, using a range of instruments at the city’s disposal to maintain rule of law. This includes making participants pay for police operations although details were still to be worked out.

Switzerland is set to vote, for a second time, on changes to the COVID-19 law that extended the government’s power and in particular, the COVID-19 certificate, which has been required to access indoor spaces since September 13.