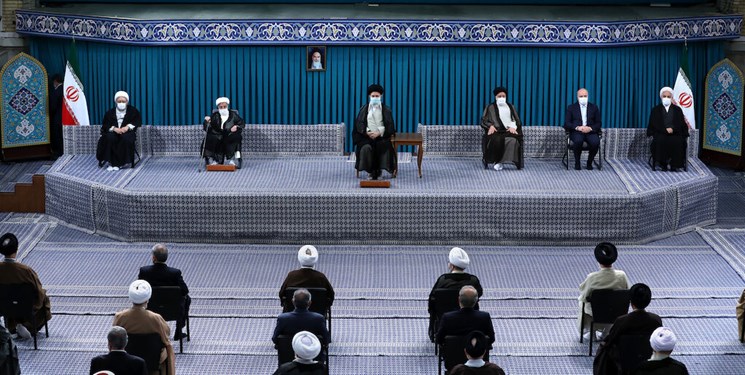 TEHRAN (FNA)- Supreme Leader of the Islamic Revolution Ayatollah Seyed Ali Khamenei stressed that unity among Muslims is not a tactical issue but is a definite responsibility and necessity emphasized by the holy Quran.

“Unity among Muslims is not a tactical matter in order for some to think that they [should] stand united with each other because of special circumstances. No, it is a fundamental matter. Synergy among Muslims is a necessity. If Muslims are united, they will create synergy, they will all grow strong. Muslim unity is a definitive Qur'anic duty,” Ayatollah Khamenei said on Sunday, addressing the Iranian officials and guests of the 35th International Islamic Unity Conference in Tehran on the occasion of the birthday anniversary of the Prophet Muhammad (PBUH) and the sixth Shiite Imam, Imam Ja'afar Sadiq (AS).

He said the birth of Prophet Muhammad (PBUH) “marks the beginning of a new era in human life. It heralds the start of a new era of divine will and divine grace for humanity”.

The Leader said the reason why the Islamic Republic laid emphasis on Muslim unity is that “there are constant attempts today to drive a wedge between Muslim sects, between Shias and Sunnis”.

“You see that the issue of being a Sunni or a Shiite has entered the American political rhetoric for several years. Although they are against Islam itself and are enemies, they do not abandon the issue of Shiites and Sunnis,” he added.

“You also see that American puppets create sedition anywhere in the Islamic world that they can,” said the Leader, citing the recent bloody attacks on mosques in Afghanistan as an example.

“Who blows up [mosques]? The ISIL. Who is the ISIL? The ISIL is the same outfit that the Americans - the same Democratic group of the United States - explicitly said we created. However, they are not saying such a thing now and deny it.”

The Leader also stressed that the main index of Muslim unity is the issue of Palestine.

Ayatollah Khamenei pointed to the recent normalization of relations between Israel and certain Arab countries, and said, “Unfortunately, some governments made a mistake — a big mistake and a sin — and normalized [ties] with the usurping and oppressive Zionist regime. This is a movement against Islamic unity. They must return from this way. They have to make up for this big mistake.”

Ayatollah Khamenei said Islam was a “comprehensive religion. Justice should be done to this comprehensiveness”.

“Materialistic political powers insist to confine Islam to personal commitment and spiritual beliefs. Such an attempt has long been underway and has been stepped up since the establishment of the Islamic Republic” over four decades ago, the Leader said.

However, what Islam espouses is that this religion should play a role in all scopes of human life, from spiritual beliefs to social, political, international aspects, or any other thing related to humanity, Ayatollah Khamenei explained.

In relevant remarks last Tuesday, Iranian President Seyed Ebrahim Rayeesi called on Muslim nations to strengthen their unity and establish stronger relations, and said that they should not allow enemies to deceive them through sowing seeds of discord.

The Iranian president made the remarks speaking at the opening ceremony of the 35th International Conference on Islamic Unity in Tehran.

President Rayeesi, meantime, paid homage to the late secretary-general of the World Forum for Proximity of Islamic Schools of Thought, Ayatollah Mohammad Ali Taskhiri, and anti-terror commander Lieutenant General Qassem Soleimani, who was assassinated by the US in early January 2020.

He described the proximity of Islamic schools of thought as an essentially strategic approach for the entire Muslim world to adopt, describing Prophet Mohammad (PBUH) as the pivot of unity among Muslims.

“After World War II, the hegemonic system faced only one sole power, and that was the Islamic system. It, therefore, placed on agenda various threats such as forming Takfiri groups, arming and funding the outfits in order to plunder Muslim nations, provoking divisions among Muslims, and installing weak government that pursue their own interests, rather than those of the Muslim world,” the Iranian president said.

He called for closer scientific, cultural and media cooperation among Muslim countries.

“We seek to ensure stability in Islamic countries, as opposed to the enemy, which tries to create instability. We believe unity is the strategy that the Islamic community should adopt, but the enemy’s strategy is to sow discord,” he added.