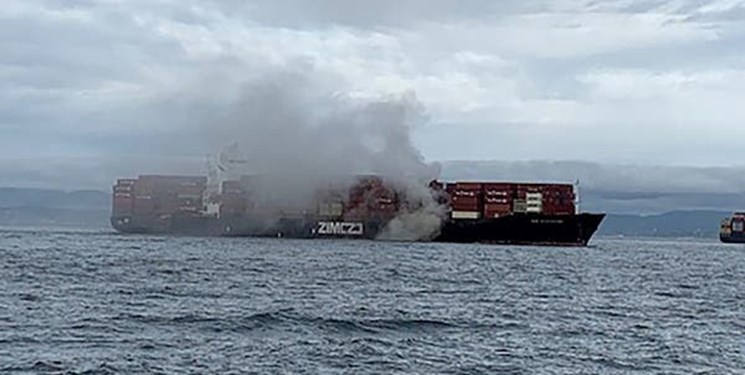 TEHRAN (FNA)- An "emergency zone" was declared around a blazing cargo ship off of Western Canada after containers carrying more than 50 tons of a dangerous chemical caught on fire.

Sixteen crew members were evacuated from MV Zim Kingston off of Victoria, British Columbia’s capital, the Canadian Coast Guard said in a statement late Saturday. Five crew members had remained onboard the vessel to fight the fire, it said, NBC News reported.

A notice on the Coast Guard’s Navigational Warnings website said the fire was "expelling toxic gas".

Video obtained by Reuters showed fire cascading down from the deck of the ship into the water.

Ten containers were currently burning, according to the Coast Guard, which added that the fire was continuing to spread. Two of the containers were carrying around 57 tons of xanthates, a chemical often used in mining.

An "emergency zone" has been set up for one nautical mile around the ship while firefighting operations are underway.

Early Sunday, the agency tweeted that there was "currently ... no safety risk to people on shore. However, the situation will continue to be monitored".

The ship itself was not on fire, according to the Coast Guard.

Canadian officials said they were working with the American counterparts to track 40 containers that had fallen overboard, saying they pose a significant risk to mariners.

The Zim Kingston reported on Friday that it had encountered rough weather West of the Strait of Juan de Fuca, which separates Washington state and Vancouver Island.

Vessel Finder website data shows that Zim Kingston was built in 2008, sails under the Maltese flag and was en route to Vancouver as the fire broke out.