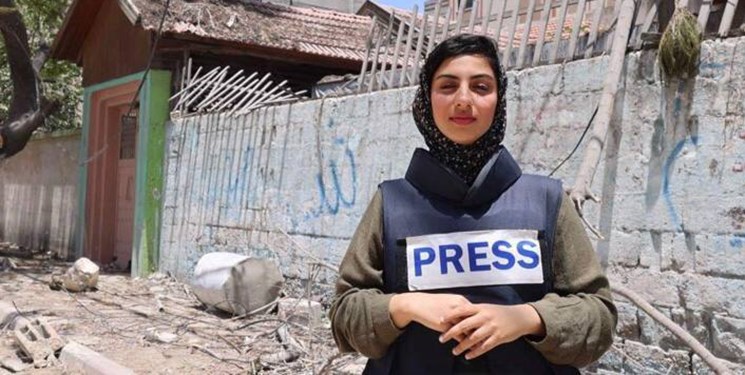 Speaking in an interview with FNA, Shabit said, “Civilians are among the targets of Israel… The Israeli airstrikes are intent to target civilians in an attempt to demolish the Palestinian resistance spirit… Israel practices the policy of weakening the psychological status of Palestinians and shaking their resistance, as it does not distinguish between civilians or militants.”

Ruba Akram Shabit is a broadcast journalist based in Gaza. She did extensive news coverage of the recent Israeli war on Gaza.

Q: Over 2 million people reside in the besieged Gaza Strip. It is clear any forms of strikes from the sky will result in civilian casualties. Why does Israel keep conducting airstrikes?

A: Israel is aware of the consequences of launching airstrikes. However, it flouts international resolutions and the provisions of international law. By conducting airstrikes Israel aims to not only cause huge damage to buildings and infrastructure, but also to break the Palestinians' willingness. This was clear when Israeli airstrike targeted residential towers containing media outlets and civilian homes. Israel practices the policy of weakening the psychological status of Palestinians and shaking their resistance, as it does not distinguish between civilians or militants. The Israeli airstrikes intent to target civilians in an attempt to demolish the Palestinian resistance spirit and terrify the civilians so that they give up their rights. According to observers, more than 70 Israeli missiles were hit in a 2 km area in al-Wehda Street. This means civilians are among the targets of Israel. Israel is of course aware that any airstrike will lead to have civilian victims but this is its plan of scaring them, creating an atmosphere of horror and achieve as much as possible of damage and loss in the Gaza strip in order to force Palestinians to end the escalation in an attempt to not appear defeated in front of the world.

Q: Netanyahu says Israel has hit Hamas hardest ever. This is while over one third of the people killed in Israeli aggression are women and children. How do you find his statement?

A: Israel claims it concentrates on targeting military targets, but what is seen on the ground is that the airstrike led to a huge damage of residential buildings. Residential towers of citizens' apartments and media outlets were among the targets of Israel and totally collapsed. Israel claims it has accurate capabilities, therefore, the airstrike led to civilian victims most of them were kids and women. This indicates that Israel is doing a collective punishment for Palestinians in general even if Hamas' families were among the victims; they are still considered civilians according to the international law. This is not the first time Israel targets civilians on purpose, in 2014 some 2200 people were killed and only 200 of them were militants. These Israeli policies of killing civilians aim directly to undermine the resistance and force civilians to put pressure to end the escalation.

Q: How do Gazans regard the UN that failed to even stop the Israeli aggression towards them?

A: Palestinians have always called on the international community and the UN to stop the Israeli attacks against civilians, and the UN has always failed to save Palestinians. This is clear where some 107,000 Palestinians left their homes and took shelter from Israeli attacks in UNRWA schools according to human rights organizations. Palestinians believed that the UN would do actions to end the escalations and especially the attacks against civilians but the UN as usual was siding Israel at the expense of Palestinians under the pretext that Israel is defending itself. Israel committed crimes over the Gaza Strip like directly targeting children and women, using illegal weapons and the UN ignored holding Israel accountable for these violations of international law. Palestinians believe that the UN should now start being committed to its duties and help in the process of reconstruction in the Gaza Strip, especially that the amount of damage demands serious efforts from the UN.