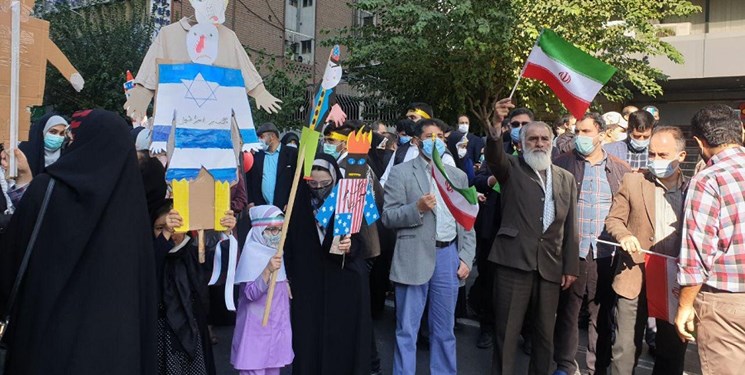 TEHRAN (FNA)- Iranian people and students participated in rallies in Tehran and other cities of the country on Thursday to mark the 1979 seizure of the US embassy, lauding the Islamic Revolution Guards Corps (IRGC) for its successful operation to take back Iran's oil cargo from Washington in the Sea of Oman.

The Iranian people, including school and university students, in different cities across the country participated in massive rallies, chanting "Down with the US" and "Down with Israel" slogans to show their strong condemnation of Washington's policies against Iran. 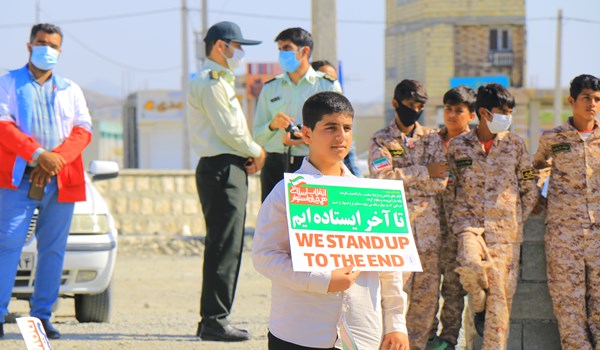 The Iranian people from all walks of life, most of them wearing face masks and meeting social distancing regulations due to the coronavirus epidemic, took to the streets to mark the anniversary of the US embassy takeover in 1979 and commemorate the National Day of Campaign against Global Arrogance and the National Student Day in massive rallies on Thursday. 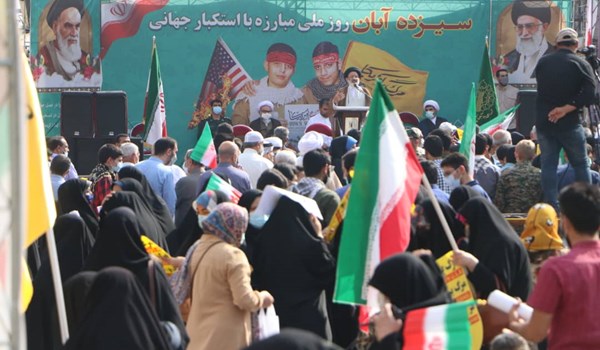 They also underlined support and hailed the IRGC naval forces for saving an Iran-owned oil cargo stolen by the US in the Sea of Oman.

The IRGC naval forces fought off a US attempt to steal an Iranian oil cargo in the Sea of Oman in a flagrant violation of international rules, seen as yet another move to escalate tensions against Tehran. The US seized a tanker carrying Iranian oil for exports in the waters of the Sea of Oman and transferred its crude shipment to another tanker, voyaging towards an unknown destination. The IRGC naval forces took immediate action to surround the tanker and landed troops on the deck of the vessel in heliborne operations and directed it towards the territorial waters of Iran.

Then several US military helicopters and warships rushed to seize the tanker but failed thanks to the decisive and mighty action of the Iranian naval forces.

The American forces again attempted to block the path of the tanker by more warships and helicopters, but were again pushed back. The oil tanker is currently in the territorial waters of Iran.

Participants in the annual rally in front of the former US embassy in Tehran known by the Iranians as 'the den of spies' carried placards deploring the US hegemonic policies in the world, and set fire at the US and Israeli flags to show protest at their crimes against other nations.

At the end of their rallies on Thursday, the participants issued a resolution in which they underscored mistrust for the US and other arrogant powers.

"We, the powerful and arrogance-fighting nation of Iran, while utterly distrusting the hegemonic powers, led by the terrorist and criminal US regime, believe that the US withdrawal from the nuclear deal and intensified hostile policies of the criminal rulers in the White House against the Iranian nation and government accompanied by extensive psychological, media and economic war is a big experience", and stress the need for the removal of all sanctions against Iran, part of the resolution said.

The resolution also condemned the recent cyberattack against Iran's fuel delivery system, blaming the US and Israel for the mischief.

It also reaffirmed the Islamic Republic’s support for the cause of al-Quds and the Palestinian resistance, and also for the Lebanese resistance group Hezbollah, Yemen’s Ansarullah movement, Bahraini protesters and the popular Iraqi and Syrian forces.

They are the “powerful army of the Islamic Ummah (community)” against the “system of global domination and Zionism” and regional reactionary regimes, the resolution said.

It condemned the normalization agreements between certain regional countries and Israel, urging those countries’ rulers to reconsider their decision and end their relations with the occupying regime.

The resolution highlighted the importance of using the classified documents found during the US embassy takeover for the purpose of familiarizing the younger generations of Iran with Washington’s conspiracies.

The Iranian administration and parliament should prevent “the evil, malicious, and criminal actions of the Americans in Islamic community from fading into oblivion”, it added.

"We consider the failure of US strategies and policies in West Asia and the disgraceful withdrawal of its terrorist forces from Afghanistan, Iraq and Syria as a sign of accelerating the US decline and the result of the strength and resilience of the nations in the region under the discourse of resistance, unity and arrogance-fighting of the Iranian nation and emphasize the vigilance and wisdom of the regional nations against the conspiracies of the White House, including the recent terrorist crimes in the mosques of Afghanistan and during the Friday prayers," it added.

The resolution also paid respect to former Commander of the IRGC Qods Force Lieutenant General Qassem Soleimani who was martyred in Iraq by the US in 2020, stressing the necessity for taking revenge for his martyrdom.

November 4 marks three important events in Iranian history: the takeover of the former US embassy in Tehran by Muslim students following the Imam's line in 1979 and the exile of the late Founder of the Islamic Republic Imam Khomeini by the Shah in 1964. It also marks the massacre of a large number of Iranian school students by the army of the former Pahlavi regime during the 1979 Islamic Revolution.

Iranian university students took over the US embassy building to thwart what they called Washington's plots against the Islamic Revolution.

Inside the embassy, the students found shredded documents which proved their convictions.

The event turned into a major political standoff between Tehran and Washington and brought then-US President Jimmy Carter under immense pressure to have the embassy staff released ahead of his re-election race in 1980.

Pushed for military action by National Security Adviser Zbigniew Brezinzski, Carter ordered Operation Eagle Claw, a clandestine military effort where US special forces were supposed to fly into Iran on board eight helicopters and take the detained embassy staff back into the US.

The operation began in April 1980, when the helicopters successfully entered Iranian territory and landed in central deserts near the city of Tabas before a planned flight to Tehran. From that point, however, the operation turned into a massive failure as a sand storm disabled two of the helicopters and a third one crashed into a transport aircraft the next morning.

Carter was forced to call off the disastrous operation and take responsibility for it in a public speech, which also greatly damaged his chances of re-election.

The saga finally ended after Iran agreed to release the detainees under a deal mediated by Algeria, through which the US undertook not to take hostile action against the Islamic Republic.

Through years, however, Washington has flaunted the agreement and done everything it could to harm Iran and topple the Islamic Republic.

On January 20, 1981, just as former US President Ronald Reagan gave his inauguration speech and celebrated his victory against Carter, the embassy staff were first flown from Iran to Algeria and then left the African country for Germany.

The former US diplomatic compound in Tehran has long been regarded as a clear indication of how deep America's intelligence operations run in other countries.

The students who took over the mission were able to piece together the shredded remains of various embassy documents that hinted at Washington's secret plots against Iran and the Islamic Revolution.

Founder of the Islamic Revolution Ayatollah Seyed Ruhollah Khomeini hailed the move by the students, describing the embassy takeover as the "second revolution".