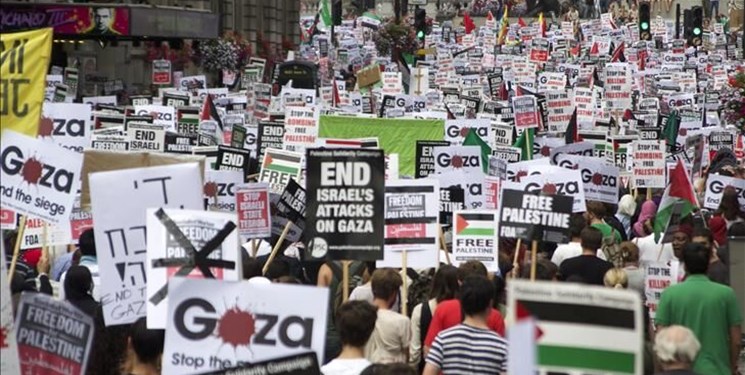 TEHRAN (FNA)- An American political activist says the social media networks have made more and more Americans aware of the Palestinians’ plight, which is backed and funded by Washington.

Speaking in an interview with FNA, the activist said, “There has been a mass awakening amongst the American people, including within the Jewish community… For the first time in history there were demonstrations for Palestinian rights in almost every state in the United States with hundreds of thousands of people in the streets protesting against Israeli war crimes.”

The interview was conducted with an American political and media activist whose area of activism includes pro-Palestine campaigning in the US’ West Coast. The activist asked to remain anonymous for security concerns.

Q: There were many pro-Palestine rallies in the United States during and after the clashes in the occupied West Bank and the war on Gaza in May 2021. How do you think the Palestinian Cause is viewed by the Americans, especially after the recent war?

A: Americans who take the time to educate themselves on this topic and who take the time to inform themselves, will all reach the same conclusion, that of truth. The problem lies in the lack of knowledge amongst many Americans about the Palestinian struggle. The education system and our major news outlets provide no insight into global suffering at the hands of colonialism, one in which we actively aid. As a result of this dichotomy, the average American is completely unaware or misinformed on this topic. That being said, with the recent utilization of social media to amplify the voices of the voiceless, there has been a mass awakening amongst the American people, including within the Jewish community, who are aware that the state of Israel is not a reflection of their peaceful religion and is a political cause using religion to push its agenda. For the first time in history there were demonstrations for Palestinian rights in almost every state in the United States with hundreds of thousands of people in the streets protesting against Israeli war crimes. As hopeful as this has made many advocates for Palestinian human rights, the sad reality is that it is still not enough; Palestinians continue to live under military occupation in an apartheid state that is funded and backed by the US. Americans are waking up, but Palestinians continue to suffer. The Palestinian cause needs to become a cause for not only every American but any human that advocates for the right to live in dignity and peace.

But at this pivotal time in history, it all comes down to the American public perception; as long as the US supports Israel, the occupation will continue.

Q: During and after the war, social media networks were full of anti-Israeli sentiments; but, this was not the case in the TV and radio programs aired by the mainstream media. What do you make of that?

A: The mainstream media has never reflected on matters accurately. It is a tool used to manufacture consent for continuing the status quo. When reflecting on mainstream media's coverage of Palestine, time and time again we have seen that the Israeli narrative is given far more precedence than that of Palestinians. In 2014, Israeli spokes people over represented the narrative by a ratio of 3:1 compared to Palestinian representation in news coverage, that ratio continues to increase. While pro-Israeli lobbies influence American politicians, Israel’s PR campaign ensures that American media continues to claim the conflict is about ideology, not land, and about terror, not territory, completely devoid of context, and never addressing why a society would continue to resist without a military. As a result, all mainstream media and elected US officials maintain that Israel has a right to “defend itself” and all Palestinians are labeled as terrorists, leaving out that they are one of the world's most advanced military powers with state of the art weapons funded and backed by the United States; defending themselves against a defenseless population that is without a military or an army. This is constantly repeated and reiterated in American media, shaping Americans opinions into viewing the victims as aggressors and the oppressors as victims, all while Palestinians continue to be systematically displaced and denied their basic human rights. The UN Resolution 242 which was passed in 1967 has forbidden taking over of territories by war and has emphasized the withdrawal of all Israeli armed forces; however, Israel has not only failed to comply, but continues to build illegal settlements on land that is legally Palestinian. The mainstream media in America is able to manipulate the narrative in such a pristine way that completely disregards the illegal occupation and overlooks the international war crimes which have been documented by the ICC and human rights organizations.

Q: The US allows Israel to even wage war on Palestinians in the besieged Gaza. What does it reveal about the US foreign policy?

A: In order to understand why US foreign policy has been involved both overtly and covertly in global wars and coups that have destroyed entire economies, one has to take a look at capitalism and its need for neoliberalism to survive locally and imperialism to expand globally. Majority of these wars are not to “protect democracy” or “freedom” but in fact intended to expand the US commercial needs and satiate its economic, military, and political agenda by expropriating the third world. If a country does not willingly aid in the expansion of the global empire, and if an indigenous culture begins to fight back, billions are invested in overthrowing their government in order to place a US backed individual that will comply; and at the same time, billions are invested in the media to portray any resistance as dictatorial and authoritative, justifying American intervention and economic destruction in the eyes of Americans. Unfortunately, Americans never benefit from these endeavors; in fact, instead of funding its own education system, social programs, health care and economy, the American tax dollar aids in funding the military industrial complex, which continues on its path of destruction in order to fill the pockets of a select few. In the Middle East, Africa, and the global South trillions have been made by looting their oil, gold, harvesting of poppies for heroin, copper, iron, cheap labor and so on, all while countries that stand against imperialism and attempt to nationalize their own resources, such as China, Russia, Syria, and Iran continue to be provoked and demonized by the US Media and its proxies. As a superpower that is dictated by the likes of corporations and bankers that aim to ultimately dominate all aspects of human life with a global empire, it is no surprise that we find the US foreign policy intertwined with war in every corner of the world.