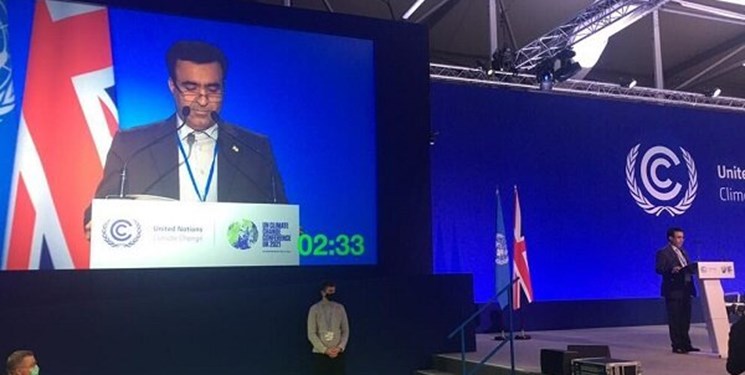 TEHRAN (FNA)- Iranian Vice-President and Head of the Department of Environment Ali Salajeqeh warned that the sanctions and economic terrorism launched against his country and other states is a major contributor the exacerbation of global warming.

“An emerging threat to sustainable development is the emergence of economic terrorism. Unjustifiable and unfair economic coercive measures that have been imposed upon my country have targeted the wellbeing and health of our citizens. Among others, such measures have seriously constrained access to and transfer of relevant technologies and equipment, necessary for our national mitigation and adaptation efforts as well as air quality improvement,” Salajeqeh said, addressing the UN climate summit in Glasgow, Britain.

“These coercive measures and sanctions, in explicit contravention to global sustainable development agenda and relevant multilateral agreements, have consequences beyond our national context, hence, contributing to global warming,” he added.

The full text of his remarks is as follows:

Climate change is a global challenge with serious consequences for nations across the globe. We should act now, for the cost of inaction far outweighs those of taking concrete measures. We need to address the root causes of climate change in order to be able to respond to it effectively. As acknowledged by scientific evidence, the largest share of historical emissions, causing concentrations of greenhouse gases in the atmosphere have occurred during the industrial revolution. Developed countries, however, continue to seem hesitant to take the lead. The mitigation gap remains due to their unfulfilled, insufficient and sometimes evaded commitments.

Achieving the long term goals of the Convention and the Paris Agreement highly depend on cooperation by the parties. We will not achieve their goals unless we land our success on the solid basis of well-recognized principles of the Convention and the Paris Agreement (PA). Flexibility for developing countries is the key to success in dealing with the major areas such as mitigation, adaptation and capacity building. It is crucial to be reminded of the very principles of the Convention, particularly the principle of equity and common but differentiated responsibilities and respective capabilities (CBRD- RC), as well as historical responsibilities of developed countries. Developed countries should effectively deliver on their responsibilities and undertakings as stipulated by the Convention and the Paris Agreement and demonstrate that in the Modalities, Procedures, and Guidelines (MPGs).

Despite the very profound socio-economic Covid-19 related crisis that we are facing, meeting climate change goals could be achieved through cooperation. Requirements and pre-conditions for this journey including financial resources, capacity building and related technologies should be prepared to make those plans a reality.

The outcome of the COP26 in Glasgow must be firm political cooperation for the provision of required means and support to developing countries for the implementation of the Paris Agreement; which provides the required financial resources and transfer of technology to developing countries. The message that is coming out from Glasgow would be a reiteration on the right to sustainable development, through which developed countries shall abide in action with their undertakings and developing countries shall be ensured of their safe environment, economic certainty, social development and poverty eradication as the first and overriding priority.

The spirit of the negotiation in Glasgow could be constructive if all the parties show flexibility on the outstanding issues of the Modalities, Procedures, and Guidelines (MPG) for implementation of the Paris Agreement. Common will is required to advance the negotiations in unfinished jobs of Article 6, common time frames to NDC and providing the long term of financial resources and work for a deal that is credible and balanced. Completion of the Paris Rulebook is a key priority for COP26. We emphasize a balanced outcome on Article 6, consistent with the objective of higher ambition in both mitigation and adaptation actions.

I would like to stress the need for having a balanced approach. History tells us win-win approaches are more durable. Let’s take into account the concerns of all the parties. Cooperative approaches in climate change mitigation and adaptation should be inclusive and benefit everyone; no one should be left behind. We should avoid politicizing climate change. The political interpretation of the Paris Agreement must be avoided. Disguising political objectives as climate change policies would erode confidence among parties.

An emerging threat to sustainable development is the emergence of economic terrorism. Unjustifiable and unfair economic coercive measures that have been imposed upon my country have targeted the wellbeing and health of our citizens. Among others, such measures have seriously constrained access to and transfer of relevant technologies and equipment, necessary for our national mitigation and adaptation efforts as well as air quality improvement.

These coercive measures and sanctions, in explicit contravention to global sustainable development agenda and relevant multilateral agreements, have consequences beyond our national context, hence, contributing to global warming. Despite such unlawful pressure, Iran has made significant strides in transforming its development to a sustainable path. The Islamic Republic of Iran, in the framework of national strategies, policies and laws diligently pursue greenhouse gas emission reduction. General Environmental Policies devised and announced by the Supreme Leader of the Islamic Republic of Iran in 2015, especially emphasizes the development of green economy, low carbon industry, use of clean energy and development of green and non-fossil public transportation as well as Climate change management and response to environmental threats such as desertification, dust, and drought.

General policies to improve the consumption pattern particularly through energy-saving and continuously reduction of energy intensity index to at least one-half of the amount available by the end of the Sixth National Development Plan by using price and non-price tools, putting in place mandatory standards on energy-based tools and equipment, objectives and macro strategies stipulated in National Energy Strategy Instrument, such as increasing efficiency and reducing energy by 50% by 2041, reducing greenhouse gas emissions, promotion of saving and energy efficiency culture, increasing the share of clean and renewable energy, diversification of energy resources, low carbon economy strategy development, provision of TNA and Technology Climate Change Empowerment Book, increase the share of natural gas in Iran's energy mix increased to more than 70% and more than 96% of Iran's population has access to the gas network are all among those steps that have been taken so far by the I.R. Iran.

Allow me to conclude by reiterating that our collective efforts have to bring outcomes that bear pragmatic assurances for the sustainable development of developing countries. As the Islamic Republic of Iran, we are committed to engaging constructively in the negotiation processes.